* Max, however, is a psychopath 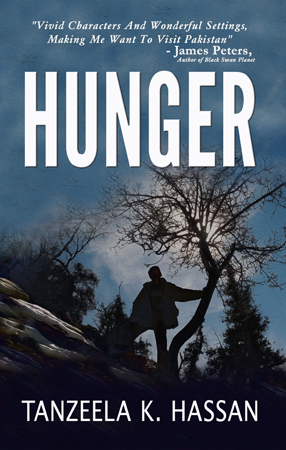 Stories are about people – whether they are fictional, inspired by a true story, or based exactly on events as they transpired. These stories connect the writers with their imagination through the author’s words. Hunger by Tanzeela K. Hassan is one such story where the characters blend with the readers’ thoughts to create a world of their own. It is a story about Adam, Max, and Iman. Adam’s life is based in New York. His life begins to turn when after his father’s death he visits Pakistan at his grandmother’s request. The story of Iman and her life’s backstory will keep you glued to the pages.

Max, however, is a psychopath. He leads an abnormal life of paranoia and eventually commits an atrocious crime. The storylines of some characters do intertwine and create a subplot that further enhances the story and makes the plot to move forward.

Tanzeela, an aspiring author, has used dialogues to share the thoughts of characters, reveal their intentions, show their actions, and keep the readers connected to the plot. Writing dialogue is indeed a challenging part when it comes to incorporating it in a novel. Tanzeela does it with ease. At some points, the dialogues do take up most space in a chapter; they are needed to connect the dots between the various characters of the novel. The opening of a novel does make or break the author and the novel’s image. Tanzeela begins Hunger, as, “Like the fire that doesn’t care if it burns the wood or the flesh, Max had no preferences at all. In his world, he only cared about giving them what they deserved rather than what they desired.”

Tanzeela, an aspiring author, has used dialogues to share the thoughts of characters, reveal their intentions, show their actions and keep the readers connected to the plot

Tanzeela’s effort in juggling between characters and their respective stories is commendable. From the first page until the last word, the image and the persona of the characters remain vividly separate and distinctive in the readers’ minds. It surely takes courage to include multiple characters having discrete traits to include in a novel. James Peters, author of Black Swan Planet, endorses the book by writing, “Vivid characters and wonderful settings, making me want to visit Pakistan”. Hunger does show the authors the scenery of the Northern Areas of Pakistan. Perhaps the tourism sector of Pakistan can be promoted through literature when prose writers use them as the setting of their stories and as a backdrop to their scenes.

Tanzeela’s creativity is evident in her inspiring profile. She has her postgraduate degree in food and nutrition, but she considers stories to be her food for thought. Tanzeela believes that she must provide avenues to foster ideas and inculcate writing abilities among the children. This led her to produce Temoli, an anthology journal providing a creative outlet to young writers from the age group of nine to 14 years.

The story will lead you through an intricate web of thoughts laid down by Tanzeela. At each junction, there is the character’s intention and action that changes the course of the character’s journey. Ateefah Sana Ur Rab, the author of Entombed Silence, praises Hunger by writing, “It is the most interesting job to read a book that pulls you in from the very start. A book that has a good lot of suspense mixed with an equivalent amount of thrill. I loved the author’s writing style and the way she described the beauty of Gilgit. The description was so breathtakingly beautiful that I could actually see it all in my imagination. I could feel myself in the book, watching Adam and the others! Wow! I love how this book made me feel! Such a good read it is!”