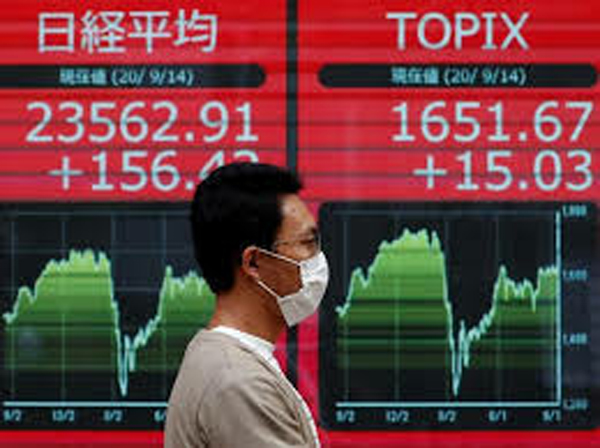 Global stocks and the euro tumbled on Wednesday as coronavirus infections rose in Europe and the United States, igniting fears of strict lockdowns that would damage already fragile economic recoveries. European shares fell 2.8% to their lowest since late May as Germany and France prepared to announce restrictions approaching the level of last spring’s lockdowns, as COVID-19 deaths across Europe rose almost 40% in a week. French shares were among the hardest hit, losing 3.2% to a five-month low. Investors were rattled by a media report that France might impose a national lockdown from midnight on Thursday. In Frankfurt, German stocks slumped 3.1% to their lowest since June. Chancellor Angela Merkel was due to meet state premiers to discuss closing restaurants and bars and allowing people to go out in public only with members of their household. The gloomy news pummeled stocks seen as especially sensitive to the economy. Automakers and banks led the losses, falling 3.9% and 2.1% respectively. Concerns over the second wave of infections played out in currency and bond markets, too, with the euro slumping 0.6% against the dollar to $1.1736. German government bond yields fell to their lowest since March. Wall Street futures pointed to losses for U.S. stocks of 1.1% to 1.8%. The MSCI world equity index, which tracks shares in 49 countries, fell 0.6%. The United States, Russia, France and others have seen record numbers of infections in recent days with European governments introducing new curbs that investors fear could maul fragile recoveries. “The appetite of the different countries’ authorities to enforce new lockdowns – that’s the point of discrimination between good market performance and bad market performance,” said Alessia Berardi, senior economist at Amundi. “The second wave is now clearly very strong in Europe.” Asian shares lost ground after initially showing some resilience, in part due to more limited COVID-19 outbreaks and better recoveries in the region’s major economies. MSCI’s ex-Japan Asia index lost 0.1%, turning negative even after China and South Korea made gains. Wall Street saw a mixed day on Tuesday, with the S&amp;P 500 losing 0.3% but the tech-heavy Nasdaq Composite climbing 0.6%. Apple Inc, Amazon.com, and Google-parent Alphabet report later this week, closely watched because they have been among the few winners from the pandemic.

Adding to the mood of uncertainty is the Nov. 3 U.S. presidential election. Former Vice President Joe Biden has enjoyed a consistent lead over President Donald Trump. Investors cautiously bet on his victory and possibly a “blue wave” outcome, where Democrats take back the Senate as well. But Wall Street’s volatility index, a measure of market expectations in share price swings, rose to 36.54, its highest since early September. That reflects wariness that the election outcome itself could be contested, some market players say. An unclear result would leave expectations of a U.S. fiscal stimulus package to counter the coronavirus pandemic in limbo. “It is not yet clear that we will have a winner at this time (next week) as many State Secretaries and voting commissions are hedging their bets that they will indeed be able to project the winner by next Wednesday morning,” Deutsche Bank analysts wrote. The uncertainty was apparent in currency markets, too: One-week implied volatility indicators for the euro and the yen rose to their highest in nearly seven months. The same measure of volatility for the Chinese yuan also spiked, hitting its highest since January 2016. Against a basket of currencies, the dollar gained 0.4%.