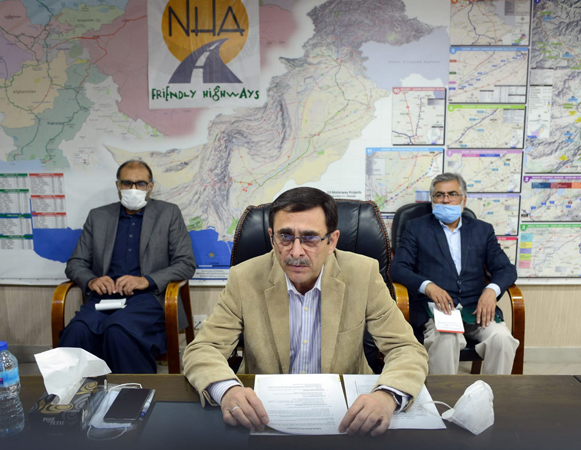 In line with directive of Prime Minister Imran Khan on reaching out to the public through holding Khuli Katchehris, National Highway Authority Chairman Capt (r) Sikander Qayyum held an E-Kachehri at NHA head office through official Facebook page and answered to the questions poses by the people from all over the country.

In his opening remarks, Chairman National Highway Authority Capt (r) Sikander Qayyum said as per directive of Prime Minister Office, a mechanism has been evolved to control prices and quality of items on motorways to facilitate the travelers. According to which list of prices shall be placed at prominent places at Restaurants, Tuck Shops etc set up at rest areas and service areas. Banners have also been placed with designation and telephone numbers of concerned officials. In case of overcharging and sale of sub-standard items, travelers may contact at the given numbers. NHA, as per clauses of contract will take action against the violators. NHA has also formed teams for proper checking and keeping an eye on the system. Chairman National Highway Authority Capt ® Sikander Qayyum sought cooperation, to this effect, of the people so that this process could be continued successfully.

Giving answers to the questions of the people, Chairman National Highway Authority Capt (r) Sikander Qayyum said, complaints made by the people are seriously taken and immediate remedial measures are devised. He said, at Shorkot issues relating to flow of traffic were of technical natures which now have been solved and that hopefully in four to five days traffic will be able to move to their destination without interruption at this location. Speaking about Balkasar-Mianwali-Muzaffargarh road he said, it has recently been handed over to NHA after federalization. Presently it is not in good condition. In order to improve it right now, the road has been included in the Annual Maintenance Plan, while later, it will be dualised. Talking about the construction of approach road of Layyah Taunsa Bridge he said, work for construction of road has been tendered.

He said, Intelligent Transport System (ITS) along Multan-Sukkur Motorway (M-5) has been installed and now steps are being taken to make it operational. He said, Hyderabad-Sukkur Motorway is a mega project and only missing link of Peshawar-Karachi Motorway project.

In order to ensure its improved planning NHA is arranging a seminar of all the stakeholders. He said, procurement work of Kuchlac-Zhob project has been completed and it will be awarded soon.

E-tendering is an important step towards transparency in awarding contracts and that first phase of E-tendering will be launched next month. Initially E-Tendering will be implemented on maintenance projects and later on, it will be extended to other projects. NHA is endeavoring hard to make E-tendering fully foolproof. Answering to the question during the E-Kachehri, Chairman National Highway Authority Capt ® Sikander Qayyum said, toll plazas are established as per approved policy at a distance of 35 to 45 km. He informed Federal Minister for Communications and Postal Services Mr. Murad Saeed has directed to deploy motorway police on highways and motorways. He further said, work on Hakla-D.I.Khan Motorway is in progress and it will be completed by June next year. Lahore-Gujaranwala section (N-5) will be improved under the 2020-21 development plan, he added.