At least 8 killed, over 110 injured in blast at Peshawar seminary 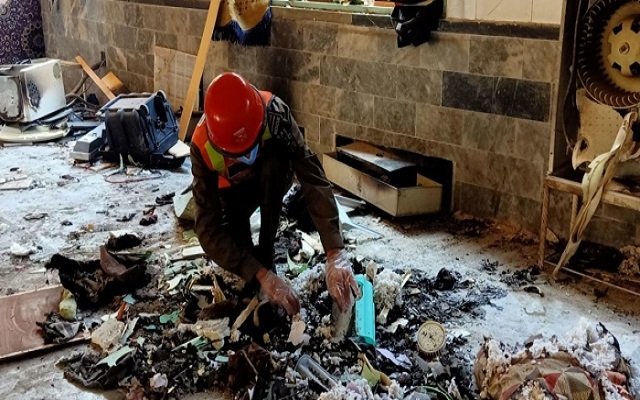 At least eight people were killed and more than 110 injured in an explosion on Tuesday morning at the Jamia Zuberia madressah in Peshawar’s Dir Colony.

According to Lady Reading Hospital spokesperson Mohammad Asim, four of the deceased were students between the ages of 20 to 25.

“The blast took place in the madressah during a Quran class. Someone took a bag inside [with explosives],” Waqar Azim, a senior police official, told AFP.

Mohammad Ali Gandapur, another senior police official, confirmed the details. He said two teachers were among the wounded.

Senior Superintendent of Police (Operations) Mansoor Aman confirmed the explosion, saying that initial reports suggest an improvised explosive device (IED) was used in the explosion. “Five kgs of explosives were used in the blast.”

The area has been cordoned off and police teams are collecting evidence, he added. No group has claimed responsibility for the attack.

The LRH spokesperson said that seven dead bodies and 70 injured have been brought to the facility. He later said that another of the injured succumbed to his injuries, raising the death toll to eight.

He stated that the injured were being provided with immediate medical attention and the hospital’s director was present at the emergency ward. He added that an emergency had also been declared at the medical facility.

Khyber Pakhtunkhwa Health Minister Taimur Saleem Jhagra visited the site of the blast. Speaking to reporters, he said that the focus was on providing the injured the best possible treatment to increase their chances of recovery.

Khyber Pakhtunkhwa Inspector General of Police (IG) Sanaullah Abbasi while talking to reporters said that the police is trying to provide security as much as they can. “We are very saddened by this. We will ensure the security of the city,” he said.

He added that the police would investigate “all dynamics”.

President Arif Alvi said that blast was “shocking and saddening for all of us”. He called for the “heinous criminal terrorists” to be apprehended and given exemplary punishment.

Prime Minister Imran Khan said he was “deeply saddened by the terrorist attack”. “My condolences go to the victims’ families and prayers for early recovery of the injured,” he tweeted. “I want to assure my nation we will ensure the terrorists responsible for this cowardly barbaric attack are brought to justice as soon as possible.”

The United Nations Office in Pakistan said it was “appalled” by the attack. “We stand together in shock and grief after the heinous attack today on Jamia Zuberia madressah, Peshawar, where children take classes. We are appalled by this attack on children while they were in a place of prayer and learning,” it said.

Information Minister Shibli Faraz strongly condemned the blast, saying those who attack students gaining knowledge have no connection with humanity. “We will defeat the objectives of those attacking the stability of the country,” he added.

Human Rights Minister Shireen Mazari called it a “cowardly act by terrorists”. “Our fight against terrorists and their extremist ideologies has to be won decisively – we have no option,” she tweeted.

Communications Minister Murad Saeed said whether it was the attack in APS or the blast at the madressah in Peshawar, it was the “nation’s grief”.

“Enemies have once again attacked the peace that we sacrificed thousands of lives for,” he added.

PML-N supremo Nawaz Sharif also condemned the blast, saying that those who targeted the madressah “could not be Muslims”.

He said the incident reminded him of the 2014 Army Public School massacre in which 132 students and 17 school staff lost their lives and called for those responsible to be caught and punished.

PML-N Vice President Maryam Nawaz termed it a “heart-rending” incident. “The damage inflicted to students is extremely saddening. There is no compensation for the mothers who have lost their children,” she said.