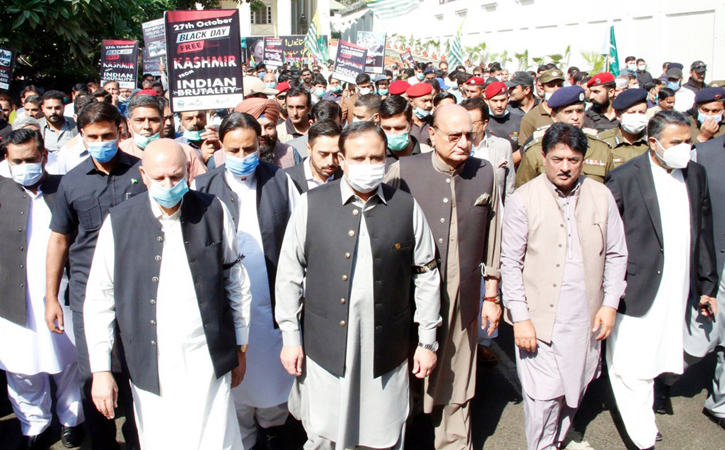 Chief Minister Punjab Sardar Usman Buzdar and Governor Ch. Muhammad Sarwar expressed solidarity with the Kashmiris and lodged their protest against the atrocities of Hindu supremacist Modi regime by wearing black armbands at a ceremony held in connection with Black Day at 90-SQA on Tuesday.

The CM said the Pakistani nation strongly protests against profane caricatures in France adding that children have been targeted in Peshawar blast. The purpose of celebrating the Black Day is to sensitize the international community about illegal Indian occupation of Occupied Jammu & Kashmir, he added. More than a year has passed to lockdown in Indian Occupied Kashmir but the perversity of wicked Modi is intact, he lamented. Everyone can guess the consequences of this continued lockdown as it was also imposed here due to corona, he said. One can fully understand the disturbing results of lockdown over oppressed Kashmiris who are continuously languishing in pain and misery for the last many months, the CM said. Regrettably, oppressed Kashmiris are going through unimaginable restrictions.

Ch. Sarwar stated the Muslims around the world strongly condemned profane caricatures in France and asked the international community to take strict action against supporters of such blasphemous caricatures. We also strongly condemn Peshawar blast, he added. Imran Khan is a genuine ambassador of Kashmir who has fought their case at every forum and exposed Indian transgressions. India has illegally annexed the state of Kashmir and Modi has written a new history of despotism in India as well as in Occupied Kashmir, he added. The world must take notice of Indian brutalities. Kashmiris struggle will bear fruit and Modi will have to be answerable to his crimes, he continued.

Chief Minister Punjab Sardar Usman Buzdar has approved to daily release 25 thousand ton wheat to flour mills. In a statement, the CM stated the decision is made to stabilize flour prices and pointed out that Punjab is the only province where 20kg flour bag is available at Rs.860. I am personally monitoring the flour prices as well as the release of wheat to flour mills while the government will continue to take steps to facilitate the citizens, he added.

Chief Minister Punjab Sardar Usman Buzdar has strongly condemned the blast in a seminary in Deer Colony area of Peshawar and expressed a deep sense of sorrow over the loss of lives. He extended sympathies to heirs and prayed for early recovery of the injured. The Punjab government fully shares the grief of the bereaved families, he added.

The more the blast is condemned, the less it would be, he said. The terrorists have exhibited the worst barbarity and attacking children’s seminary is the most coward act. Those attacking the children deserve exemplary punishment, he added. The wicked enemy is engaged in a nefarious conspiracy to destabilise Pakistan but the nation is united to overcome the menace of terrorism and enemies’ designs will be foiled, he added.