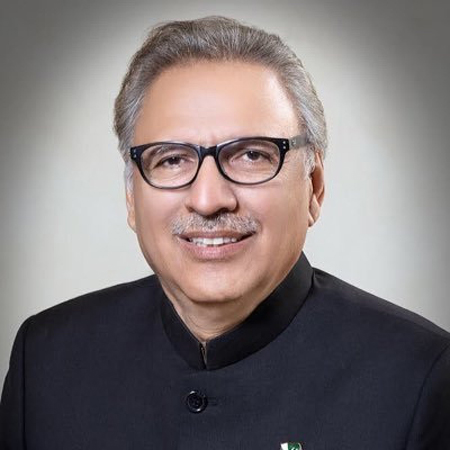 President of Pakistan Dr Arif Alvi and Governor Punjab Chaudhry Mohammad Sarwar inaugurated Corona Heroes Wall at Governor House Lahore to pay homage to those who fought on the front line against the Corona Pandemic.

Chief Minister Punjab Sardar Usman Buzdar, Provincial Ministers and Governors from other provinces also participated in the event. According to details, President of Pakistan Dr. Arif Alvi and Governor Punjab Chaudhry Mohammad Sarwar inaugurated the Corona Heroes Wall at Governor’s House Lahore on Tuesday while Chief Minister Punjab Sardar Usman Buzdar, Provincial Minister for Information Fayyaz Al Hassan Chohan and Provincial Minister Dr Akhtar Malik were present among others. Talking to media after the ceremony, President Arif Ali said that if Pakistan and India look at the issues related to Corona, then the number of Corona patients and deaths in India is in millions but thank God Pakistan has adopted its successful strategy and Coronavirus Pandemic was brought under control and today the whole world is recognizing it.

The President said that the threat of Corona Pandemic still exists and there is a need to implement all the SOPs regarding Corona prevention. He said that despite the economic challenges, the government fully supported the poor families during Coronavirus and gave Rs 12,000 each to the poor families without any discrimination. He said that today Pakistan is moving forward with success in all respects. I appreciate the steps taken by Governor Punjab Chaudhry Mohammad Sarwar and Chief Minister Punjab Sardar Usman Buzdar for the construction of Corona Wall and preventing the spread of Corona.

Talking to the media after the inauguration ceremony, Punjab Governor Chaudhry Mohammad Sarwar said that the purpose of Corona Heroes Wall was to acknowledge and pay tribute to Corona Heroes including doctors, medical staff, Vice-Chancellors of universities, Police, Armed Forces and other sections of the society. During the Corona Pandemic, we established the first telemedicine centre in Pakistan in which hundreds of doctors, consultants and professors provided medical care to millions of patients free of charge through online and video links.

Chaudhry Mohammad Sarwar said that when Prime Minister Imran Khan visited Governor House for the Corona Relief Funds, the business community and philanthropists generously participated in the Corona Relief Fund and deposited a donation of over Rs. 60 crore. Under Punjab Development Network, we teamed up with the business community and philanthropists and did the charity of 10 Billion rupees. We not only provided ration to 2 million families but also provided N95 masks, sanitizers and medicines to doctors and paramedical staff. We have also provided ventilators to various government hospitals in Punjab in collaboration with the business community, he said. More than 46,000 inmates in the jails were also provided with protective equipment to protect them from Coronavirus.

Governor Punjab expressed his gratitude to the President of Pakistan, Prime Minister, Federal and Provincial Governments, Chief Secretary Punjab, Provincial and District Administration, National Command and Operations Centre, National Disaster Management Authority, Punjab Disaster Management Authority, Police, Armed Forces and also to the Vice Chancellors for successful war against Coronavirus Pandemic. Chaudhry Mohammad Sarwar said that I am thankful to the welfare organizations and their volunteers who risked their lives to visit the homes of poor families and provided them with rations and relief items. He said that these volunteers are our assets.

Meanwhile, President Dr Arif Alvi Tuesday said that inclusive education system should be promoted to include special children in normal schooling for their effective participation in society.

The inclusive education would help the special children become an important nation asset, he said and added that after getting education in normal schools, the children with disabilities could better explore themselves as per requirements. The inclusive system would enable them to get education which can help them get jobs in market as well, he added.

Addressing a briefing session on the disability, organised by the Special Education and Social Welfare Departments at Governor’s House, the president said that employment quota in private sector institutions should be ensured and monitored by the authorities concerned for persons with disabilities so that they could earn with respect to fulfil their needs and feed their families.