In anger over caricatures, Muslims across world call for French boycott 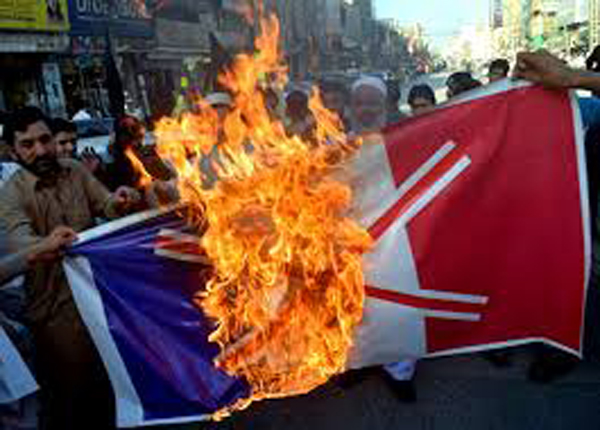 Muslims in the Middle East and beyond on Monday broadened their calls for boycotts of French products and protests, as they protested in the strongest terms the blasphemous caricatures.

Kuwaiti stores pulled French yogurts and bottles of sparkling water from their shelves, Qatar University canceled a French culture week, and calls to stay away from the Carrefour grocery store chain were trending on social media in Saudi Arabia and the United Arab Emirates. Protests have been held in Turkey and the Gaza Strip and are being planned in Pakistan.

The beheading earlier this month of a French teacher who had shown blasphemous caricatures in class has once again ignited a debate over such depictions. French President Emmanuel Macron has vigorously defended such blasphemous depictions as protected under the right to free speech. Macron’s stance has drawn anger from both everyday people and political leaders in the Muslim world.

On Monday, hashtags in Arabic on Twitter calling for French boycotts were trending high. Qatar University postponed its French cultural week indefinitely, saying its administration views insults to Islam and its symbols as unacceptable.

In Kuwait, a number of stores had removed French products like Kiri cheese, Perrier sparkling water and Activia yogurt from their shelves. The owner of Carrefour stores in the Middle East issued a statement saying the brand is a fully owned and operated business of the United Arab Emirates-based Majid Al Futtaim. The company said it understands there is some concern among consumers across the region but noted that it employs 37,000 people and is ‘proud to be from the region and for the region’.

Others on Twitter criticized what they said is France’s hypocrisy and bias against Muslims. One cartoon widely shared put forth the argument that caricatures of Muslims are defended in ‘The West’ as fair game under freedom of speech protections, while caricatures of Jews are labeled hate speech.

Turkish President Recep Tayyip Erdogan has been the most vocal on the political front, saying Macron needed his head examined and had lost his way. France responded by recalling its ambassador to Turkey.

The head of the Saudi-based Muslim World League, Sheikh Mohammed al-Issa, told a Saudi news channel that while blasphemous caricatures are insulting to Muslims, the Holy Prophet’s (PBUH) influence and status are greater than any impact from such drawings. He said Muslims should not overreact, and that the Holy Prophet (PBUH) himself faced insults much worse in his lifetime but showed Muslims the right way to act with patience and manners.

Already, a small rally was held Monday in the Gaza Strip outside the French cultural center with people carrying banners showing photos of Maron with an “X” over his face. They held banners that read: “Despite Macron’s malice, we prevail for our Prophet (PBUH)”.

In Pakistan, the leader of a religious party called on people to hold a rally against France on Friday in Lahore to mark the Holy Prophet’s (PBUH) birthday, which is traditionally a time of celebration.

Meanwhile, groups ranging from the Taliban in Afghanistan to Hezbollah in Lebanon have condemned Macron’s defense of the blasphemous caricatures.