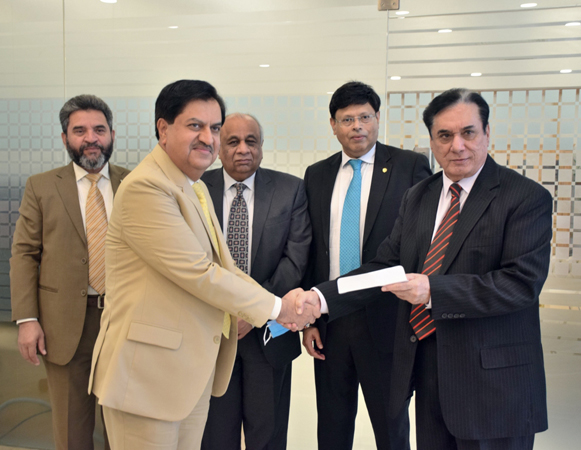 A high-level meeting was held on Monday with NAB Chairman Justice (r) Javed Iqbal in the chair. The meeting reviewed under-trial cases and decided that the prosecution and operation divisions will pursue the cases in coordination after collecting evidence, verified documents and in the light of witnesses’ statements.

Deputy Chairman NAB Hussain Asghar, Prosecutor General Accountability Syed Asghar Haider, Director General Operations Zahir Shah and DGs of all bureaus attended the meeting via video link. The meeting reviewed the overall performance of bureau and expressed satisfaction over it. The meeting also reviewed improving the standard of conducting complaint verifications, inquiries and investigations. The meeting decided to further improve the functioning of forensic Science laboratory. It was decided to impart on job short courses for capacity building of investigation officers and prosecutors to enable them to meet modern day requirements as per law.

Chairman NAB directed to utilise all available resources for concluding the mega corruption white collar cases on scientific basis so that the corrupt elements could be punished. He directed that the complaint verifications, inquiries and investigations should be taken to logical conclusion by taking the benefit of the collective wisdom of Combined Investigation Team (CIT). Proper monitoring of the performance of NAB headquarters and all regional bureaus would be ensured on the directives of chairman. By ensuring persistent vigilance the required legal assistance could be provided if required.

Chairman NAB said right now 1,230 corruption references are under trial in different accountability courts of the country. The relevant DGs should ensure that the cases should be pursued in an effective way and make possible the recovery of looted money from corrupt events and subsequently deposit in the national exchequer. He said that NAB is a national institution making sincere corruption elimination efforts.

During a meeting, Irfan Naeem Mangi, DG NAB Rawalpindi, informed that NAB Rawalpindi initiated probe in illegal award of contracts in installation of solar street lights in municipal and town committees of Sindh under Roshan Sindh Program as the subject investigation was authorized as a spinoff of an umbrella inquiry referred by Joint Investigation Team (JIT) where in as per findings of JIT at total of 19 contractors have deposited kickbacks in different fake bank accounts.

The investigation revealed that three contractors namely Wadood Engineering Service Pvt Limited along with MJB Construction Company and Zafar Enterprises (JV) were illegally awarded six contracts pertaining to a project namely “Installation of Solar Street Lights in Municipal & Town Committees of Sindh (Roshan Sindh Program)” by officers of Rural Development Department, Sindh. He further informed that an Expert from Pakistan Council of Renewable Energy Technologies (PCRET), Islamabad with NAB team collected solar lights from Hyderabad, Sukkur and Larkana and tested in the LAB of PCRET, Islamabad. Under this project besides exorbitant rates of lights were Rs. 401.2 million and huge kickbacks were paid to government officials to the tune of Rs. 22.3 million.

former provincial minister Sherjeel Memon had allegedly received Rs. 77 million which was deposited in a fake bank account. He further informed that the total liability of the project is Rs. 505 million. The accused persons have admitted their offence and entered into Plea Bargain and the amount recovered is Rs. 305 million. Today, cheques/ PO’s amounting to Rs. 224.071 Million is being handed over to CS Sindh. Earlier, NAB has already handed over land amounting to Rs. 11.66 billions in fake bank account scam cases.

Justice (r) Javed Iqbal said that logical conclusion of mega corruption cases is the top most priority of NAB. “NAB has no affiliation with any political party, group or individual. NAB NAB’s faith is corruption free Pakistan considering it as a national duty. NAB has recovered Rs. 10 billion in Sugar Scam in Sindh and deposited in the national exchequer which were subsequently returned to Sindh Government. Similarly, NAB has recovered directly and indirectly Rs. 23 billion in fake Accounts cases and deposited in national exchequer besides NAB has returned millions of rupees in Roshan Sindh Program to Sindh Government,” he said.