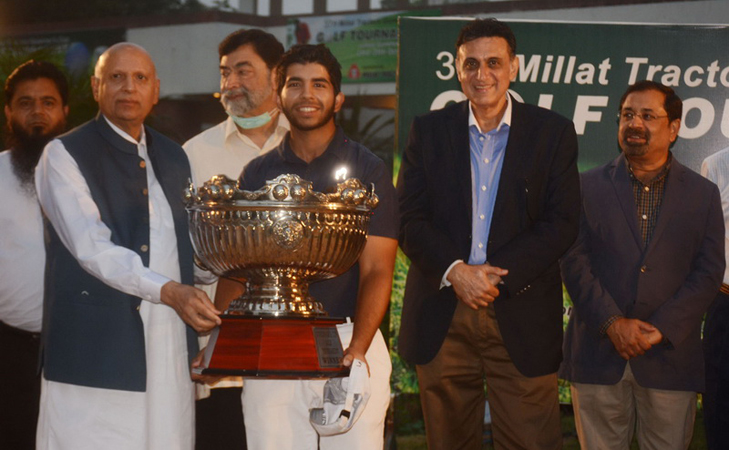 LAHORE: The 37th Millat Tractors Governor’s Cup Golf Championship came to an enlivening conclusion at the Lahore Gymkhana Club Golf Course here on Sunday after three rounds of golfing battle where quite a few young ones of the golfing arena fought it out with heroic intensity. Ultimately, the successful one turned out to be Salman Hanif of Lahore Gymkhana. His success can be attributed to good control over nerves and ability to apply his golf playing skills just when the application was needed most. During the course of the final 18 holes yesterday, the fight for supremacy was reduced to a contest between him and Abdullah Farooqi who did cast a winning spell for a major part of the final round but ultimately yielded to relentless play by the title winner Salman. And interestingly, Salman did win but only by a margin of one stroke. His overall score was net 62 on the first day, net 68 on the second day and final day’s score was net 67. His aggregate score for the championship was 197 net, nineteen under par. Abdullah’s scores were 66, 62 and 70 net and total score was 198 net, eighteen under par.

The participant who ended up third was another young one with a physique that can intimidate anyone. He played exceedingly well, yet had to be content with the third position. His score was net 206. In the race for gross honors Salman Jahangir managed to eclipse his combatants by playing a gross round of 69 on the final day. This enabled him to gross score of 216 (level par) for the three days and fetched for him the first gross position. Second gross went to Qasim Ali Khan who tried to match the excellence of Jahangir but his effort was not good enough ,the only consolation being that the difference was one stroke. Third gross was claimed by Ahmed Zafar Hayat, his score being 226. In the women’s net event, the winner was Bushra Fatima of Garrison Golf Club. She played superbly to bring in scores of net 64 and 57, the overall aggregate being 121. Mina Zainab came second while Sameea Javed Ali was third. The winner in gross category was the proficient and adept Parkha Ijaz. She played gross 77 in the first 18 holes and backed it up with a round of gross 70 on the final day. Second gross went to Ghazala Yasmin with two rounds score of gross 154. Third gross was won by Suneya Osama. Her score was 156. At the conclusion of the championship, Governor Punjab Chaudhary Mohammed Sarwar gave away prizes to winners.