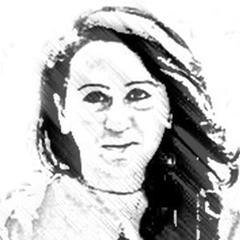 Marie Louise von Franz in the interpretation of fairy tales tells that Fairy tales are the purest and simplest expressions of the collective unconscious psychic processes. When you are reading a fairy tale you are entering the realm of the collective unconscious. They represent the archetypes in their simplest yet most varied form. The story of the “Handless Maiden” talks about feminine individuation in the context of a patriarchal shadow. It also talks about masculine transformation and a second wedding “hieroes gamos”. To follow the example of the armless maiden,” Midori concludes, “is an invitation to sever old identities and crippling habits by journeying again and again into the forest. There we may once more encounter emergent selves waiting for us.

What does this story mean? What does it mean to be handless?

As with dreams, one of the ways to make sense of stories like this is to see all the characters as parts of yourself. These are all aspects of your own psyche, but they can also be reflected in the people and circumstances of your life too.The maiden represents the feminine part of the psyche, whether you’re a woman or a man, and her severed hands point to a deep inner wound to the soul. Hands are healers they feel, they see in ways that eyes cannot see. She can’t relate because she’s lost the ability to really feel on a deep instinctual level.

The version of the handless maiden in our society is that women cut off their own hands to live through the powerful and creative patriarchal ideas. The cutting away signifies the cutting of being in the world; not only the ability to give but also to receive. The manifestation of internalized patriarchy is that women stay in the role of the puella aeternus; Forever Adolescent. If they are initiated into womanhood (adulthood) at a certain age they would be able to take responsibility of their life. As this doesn’t happen, I feel that they stay an adolescent even after marriage and parenthood. The seeds of internalized patriarchy take the form of the handless maiden. As a result, if they feel anything a woman isn’t ‘supposed’ to feel, according to the patriarchal benchmarks they dislike themselves. The seed has been so deeply embedded that shame becomes a part of their identity; shame about not being perfect, about their body type, shame about not being a home-maker (feline), shame about their sexuality, shame about not bearing a son, shame about not being a good wife, shame about not being enough on their own. The piercing claws of this animal inside sometimes make us bleed and sometimes make us the hound persecuting and judging others. It makes me realize how ourrescuer is weaved into the fabric of the persecutor. 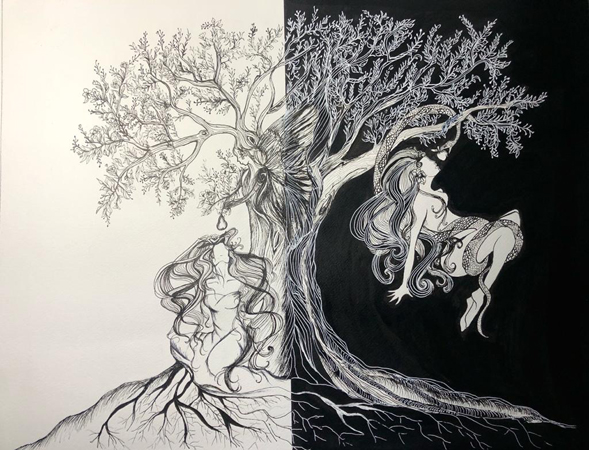 Deep inside, post-patriarchy also doesn’t feel very attractive, because of the double burden of being a breadwinner as well as a caretaker. They are looked after but stay handless and their protectors became persecutors when they don’t toe the line.

Collectively and as an individual, I was forced to grapple with the question of what it means to be a woman in modern times. Patriarchy is damaging as both yin and yangare part of us, but clashbecause of it. They are two halves that together complete wholeness but reject each other harshly and create a state of inner turmoil. The equilibrium of wholeness gets disturbed and leaves us only a shell of what we actually are, incomplete.

“There is neither Adam in existence/world nor Satan

There is neither kingdom of Solomon nor Sheba

All are mere statements and You are the meaning

You! The one who is a magnet for all hearts”

Description of the drawing

The reward of validation and perfectionism keeps this handless woman in the drawing trapped and enslaved hence inhibiting her internal desire into complete womanhood. The closest around her tameher and as long as she fits the box which was in sync with the patriarchal ideology, she is rewarded with the golden pear (the virgin and child)her emblem to goodness. When her intrinsic nature would want to revolt against this system, it faces massive rejection and shame from outside. Every time the inner urge for something more would arise which is symbolically represented by the apple (temptation to explore and knowledge) the shaming voice inside and outside appear as the horrific serpent.That inner discomfort is like the tempting seductress (Eve) trying to lure her into the gateway of shame and guilt and hence the loyal soldier of morality that she is she tries to shun it away. Every time she curbs it and hidesher disowned parts into the darkness of her shadow, she feels like the victorious martyr who then could get the reward of purity (pear) but somehow this martyr still feels incomplete and handless like she has killed a part of herself to exist.

These faceless women are the reflection of one another. The mirror between them, showing their own reflection and not the other, causing them to be reluctant to touch the layer in between the parallel universes, afraid that it will shatter and reveal the dangers of the unknown, yet they yearn for it.

For the last three centuries Milton’s eve has been viewed largely through a male lens which sees femininity as vain and seductive as well as infantile and dependent. Milton may tell the story of her demonic anger, her sin, her fall, but he tells another story as well one that reveals Eves desire for a separate self.

Eve’s actions reflect the ways in which each of us strives to secure a sense of self in accordance with an innate human paradox; the desire to be both separate from and united with another person without losing oneself in either isolation or fusion. Her drive to be both ‘apart’ from and ‘a part’ of Adam is plagued by an ambivalence that surrounds the constitution of all human identity.

Men struggle with the internalized patriarchy when they are not allowed to own all themselves completely either, the loss of feminine in their personal life takes many forms. The way of life, which is ridiculed by the culture as insipid, insubstantial and at times threatening. Families and culture are left with no recollection of how to value and tend to these qualities in themselves and other male members of the society. Sensitivity and vulnerability honor’s the body’s wisdom but they are shamed to accept it.

Containing confusion and contradiction and not dogmatically selecting black or white to kill the conflict, we need to learn how to stay in confusion with curiosity.Mindful acceptance of different dimensions and roles, where no one has to ‘die’ or be ‘hated’ for the other to exist is required. When there is more acceptance for self and different relational stances, then one can sit with less resistance towards different fragments of self and others. I have started realizing how it was never about opposites but more about interdependent realities.

Momina Ahmad is a psychological therapist and a well-being consultant . She is also a trainer in emotional regulation and holistic development of an individual, cultivating socially connected mindfulness.
She can be reached at momina.ma15@gmail.com