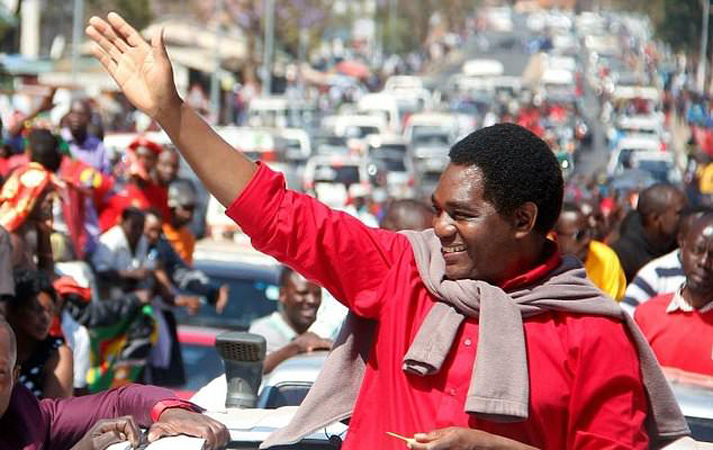 Self-made businessman Hakainde Hichilema has bid for the presidency five times already Although elections won’t be held in Zambia for another 10 months, the battle lines already being drawn over the country’s debt woes could make them the issue to topple the longtime incumbent. Presidential and parliamentary polls on August 12, 2021, will mark the sixth attempt by opposition leader Hakainde Hichilema, 58, to claim the top job. Meanwhile, 63-year-old Edgar Lungu hopes to hang on to the presidency he has held since 2015, even as the global coronavirus pandemic hammers the commodity prices that prop up Zambia’s mining-heavy economy. The presidential contenders have already begun trading barbs in the run-up to elections. But “there are more substantive campaign issues that are likely to weigh heavily on the electoral scale of considerations of many Zambians,” said University of Zambia political expert Sishuwa Sishuwa. “Top of the pile is the faltering state of the economy, worsened by a crippling public debt.” Copper-rich Zambia has seen its external debt surge to nearly $12 billion this year– around 80 per cent of GDP. Just this week, rating agency Standard & Poor’s declared Lusaka in default after the government missed an interest payment. The government had last month already asked to defer interest payments on three commercial Eurobonds worth $3 billion until April next year — just four months before the ballot. Paying down the debt has grown harder as the country’s kwacha currency has fallen around 30 per cent against the dollar since the start of the year. Low demand for copper has pressured global prices, with knock-on effects for Zambia’s mining industry, its top export earner. The International Monetary Fund projects Zambia’s economy to contract by 4.8 per cent this year. Nevertheless, analysts expect Lungu will again resort “to his tried and tested playbook of exploiting the mining industry for quick cash injections” for his re-election campaign, said Ed Hobey-Hamsher of the Verisk Maplecroft risk advisory. – ‘We are in trouble’ – For now, ordinary Zambians are bearing the brunt of the weakening kwacha, which pushed inflation up to 16 per cent in September. “Most people don’t have money currently,” said Rebecca Nkhoma, a clothes seller and one of those feeling the pinch. Nor has the crisis spared big manufacturers and retailers. “At the moment, I think we are in trouble,” said Yusuf Dodia, chairman of the Private Sector Development Association, questioning how Zambia finds itself with the “highest foreign debt and domestic debt in the history of our nation” as it marks 56 years after independence from Britain Saturday.

After suffering a narrow defeat in the 2016 election, Hichilema is pinning his hopes on disenchantment with Lungu’s administration of the economy to clinch the presidency.

“The poor economic situation should benefit the opposition as it adds to its critique of the government’s economic policy,” said Mark Bohlund of REDD research and advisory services.

After losing five elections between 2006 and 2016, Hichilema has vowed to step down as leader of his United Party for National Development (UPND) if he fails again next year. Known by his supporters as HH, Hichilema is a self-made entrepreneur who has become one of the country’s richest businessmen with interests in finance, ranching, property, healthcare and tourism.

Recently, former finance minister and now the leader of opposition party Forum for Democracy and Development Edith Nawakwi accused him of theft from the sale of state institutions two decades ago. Hichilema has maintained his innocence, while some observers believe Nawakwi’s party, widely seen as pro-Lungu, has been enlisted in a scheme aimed to discredit the strongest opposition contender. The allegations enable “Lungu to deflect public attention from growing criticism of corruption in his inner circle and government,” Sishuwa said. “It is also a strategy aimed at potentially excluding Hichilema, who poses the most credible threat to the incumbent’s chance of victory, from the ballot”.

“These people are dead scared of me and their plan is to eliminate me from the election next year,” Hichilema told AFP.