Will talk to UK authorities to get Nawaz Sharif back: PM Imran 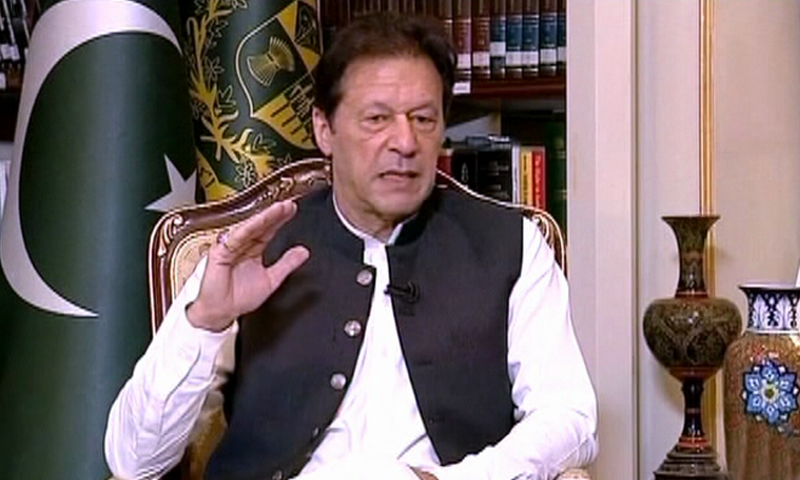 Prime Minister Imran Khan says his government is in regular contact with the British government to get PML-N supremo Nawaz Sharif deported from the UK, and he will even talk to Prime Minister Boris Johnson if it comes to that.

This was said by the prime minister in an interview with a private news channel where he lashed out at Opposition leaders, especially PML-N supremo Nawaz Sharif.

PM Imran said Nawaz had always been favoured by the judiciary and the establishment. “This is because he is a product of the establishment,” he said. The premier said that his government will bring Nawaz back soon.

“Insha’Allah, we will bring him back to the country and keep him in jail.”

He said that the former prime minister wanted to “turn the Pakistan Army into Punjab Police”, repeating accusations that the PML-N supremo wanted to control the armed forces.

Federal Minister for Information and Broadcasting Shibli Faraz said on Friday that former prime minister Nawaz Sharif will be in a jail in Pakistan by January 15.

Addressing the media, the federal minister maintained that everything was being done to stop the legal process behind the arrest of the Pakistan Muslim League – Nawaz (PML-N) supremo.

However, he added that the federal government was doing all in its power to bring the PML-N chief back. He said that Prime Minister Imran Khan will not leave him [Nawaz] off the hook.

Referring to PML-N Vice President, also Nawaz’s daughter, Maryam Nawaz’s statement, made earlier in the day, that the PTI-led government will be done for by January, Shibli said that “she [Maryam] keeps repeating the same thing, but doesn’t clarify January of what year”.

“The government will leave in January, but in January of 2028,” the minister observed.

He further stated that the opposition had no interest in the country’s economy. “When the Covid-19 outbreak occurred, the opposition was doing nothing. After facing defeat on the Financial Action Task Force (FATF) bill, they started hiding behind their rallies,” the information minister said.

Referring to the arrest of PML-N leader Captain (retd) Safar, the minister said, “What does Prime Minister Imran Khan have to do with his arrest?

He blamed the Pakistan Peoples Party (PPP) for “orchestrating the drama” of Safdar’s arrest, saying its their government in Sindh. “They should have apologised for the desecration of the Quaid’s mausoleum,” the senator added.

Discussing the pandemic that has caused havoc all across the globe, Shibli Faraz said the PTI government has fought the virus better than most countries.

“Opposition parties want to create chaos and uncertainty out of fear that their power will end once Prime Minister Imran Khan succeeds in his mission to take forward the country on the path of progress and development,” he said.