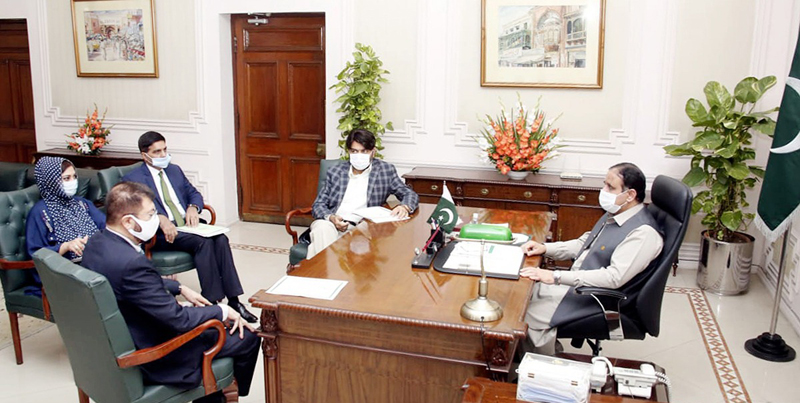 Chief Minister Sardar Usman Buzdar presided over a meeting about the steps taken for the promotion of higher education sector in the province.

Provincial Minister for Higher Education Raja Yasir Hamayun, Chairman Higher Education Commission Dr Tariq Banuri, ACS (Higher Education) and Chairman Punjab HEC Shahzeb Abbasi attended the meeting. The meeting took a detailed review of future roadmap and the CM directed to take coordinated steps while assuring full support of the government. The Punjab government is establishing universities in backward districts, he added. The matters relating to the universities will be streamlined and effective mechanism will be devised in consultation with the HEC to meet the future challenges, the CM assured and further announced to empower the youth by providing quality education to them.

Chief Minister Punjab Sardar Usman Buzdar has appealed to the citizens to follow coronavirus SOPs as the number of active cases has reached to 2424 in the province.

In a statement, he stated 171 new cases have reported while 5 patients have died during the last 24 hours. Meanwhile, 9639 were tested in this period. 97289, out of 102107, have been recovered, he added. He regretted the number of corona patients was increased due to the negation of SOPs and death rate was also enhanced. It is imperative to observe SOPs at crowded places and everyone should exhibit a socially-responsible behaviour to overcome the spread of this virus, the CM concluded.

A parliamentarian’s delegation comprising of Ch. Amir Sultan Cheema, Haji Imtiaz Ahmed Chaudhry, Ibrahim Khan, Sardar Owais Dreshak, Sardar Farooq Amanullah Dreshak, Ch. Faisal Farooq Cheema, Munib Sultan Cheema, Ijaz Hussain, Gulraiz Afzal Gondal, Tariq Tarar and chief whip Syed Abbas Ali Shah called on Chief Minister Punjab Sardar Usman Buzdar and apprised him about their constituencies related problems. The CM assured to solve their problems on a priority basis and reaffirmed that no one will be allowed to disturb the public service agenda. The parliamentarians are my companions and their genuine problems will be solved on a priority basis, he assured.

The CM expressed the satisfaction that resources are aptly used to develop the backward areas adding that the development work done by the incumbent government has no resemblance. The opposition is connived to create chaos in the country and these elements want to impede the development journey, the CM remarked.

The opposition is engaged in the negative politics of creating anarchy and it has always taken benefit of deceit and lies, he added. The nation has not forgotten the spate of institutional corruption in past tenures and the looters cannot escape from the accountability, he stressed and added that no one will be allowed to sabotage the mission of a transparent Pakistan.

Chief Minister Punjab Sardar Usman Buzdar has deputed ministers, advisers and special assistants to check sahulat bazaars, monitor the prices of essential items and submit their reports to the CM Office. A circular has been issued by the principal secretary to the chief minister. They are also directed to hold open-courts along with DCs and DPOs to solve public problems on the spot.

The place and schedule of open-courts will be announced in advance to facilitate the citizens. Meanwhile, ministers, advisers and special assistants are also directed to pay surprise visits to offices, hospitals, police stations, schools and also meet with the parliamentarians for their feedback about price control and service delivery issues. The government will not tolerate an unjustified increase in prices of essential items and it will go to every extent to ensure price control, the CM concluded.

Chief Minister Punjab Sardar Usman Buzdar has directed the IG police to submit a detailed report about the death of the pedestrian woman due to dacoits’ firing near Punjab University. It is a tragic incident and heirs will be provided justice, the CM said and extended sympathies to them.