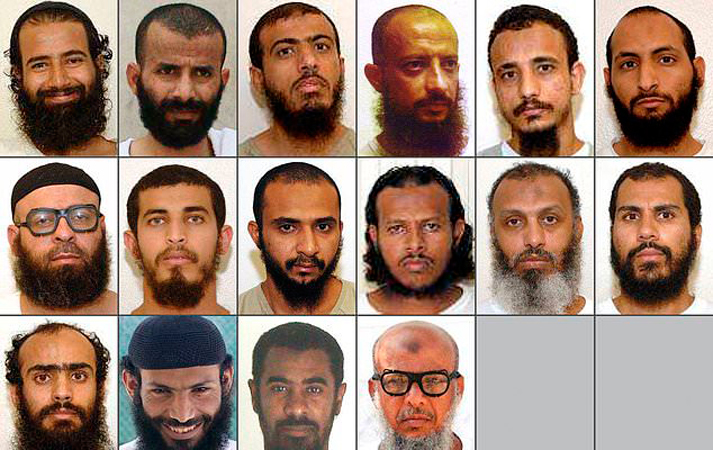 The Guantanamo detainees were promised they were being sent to a Muslim country for rehabilitation that would help integrate them into society, opening the way to jobs, money, and marriage, according to their lawyers and families.

Instead, the detainees — 18 Yemenis and one Russian, swept up from Afghanistan and Pakistan after the Sept. 11 attacks — have languished in custody in the United Arab Emirates for as long as five years, their families and lawyers tell The Associated Press.

In short, sporadic phone calls from undisclosed locations in the UAE – including a notorious prison rife with torture – several whispered to their families that as bad as life in Guantanamo was, they wish they could return there.

When one complained of “pressures” three years ago, the call was cut off; he has not been heard from since. When the Russian staged a hunger strike, he was dumped in solitary confinement and roughed up.

Now there are plans to send them to Yemen, where their families fear their treatment will be even worse.

A senior Yemeni government official confirmed the plans, pending security arrangements; a State Department official indicated the U.S. government was aware that it was happening. Both officials spoke on condition of anonymity because they were not authorized to speak to the press. The UAE didn’t respond to AP questions.

Their destination is a poor Arab country wracked by a grinding civil war for the past six years. Torture and arbitrary detention are widespread in networks of secret and formal prisons run by various factions controlling different parts of the country.

“Here the legitimate government itself is not safe. Who will be in charge of them?” said Hussien, a brother of Bir, one of the detainees.

The family of a second detainee, Salem, said: “We fear they will be gunned down or rounded up as soon as they put a foot in Yemen.”

And if they survive, they may be prime recruits for terrorists in Yemen. Ibrahim al-Qosi, is a former Guantanamo detainee who was transferred to Sudan in 2012 before surfacing as an al-Qaida group leader in Yemen two years later.

The lingering confinement of these men violates promises made by U.S. officials when they were sent to the UAE in 2015-17. It underscores flaws in the transfer program and the failure of President Donald Trump´s administration to ensure their humane treatment.

President Barack Obama pressed to close the Guantanamo facility amid opposition from Congress. The plan was to prosecute some detainees and to continue to hold others without charges while their cases were evaluated by review boards Those no longer deemed dangerous were to be transferred to their homelands or third countries.

Trump had other plans. Before taking office, he declared on Twitter that there would be “no further releases from GITMO.” His administration dismantled an entire office tasked with closing the Guantanamo facility, overseeing transfers, and following up on the resettled detainees.

Terms of the agreements the U.S. struck with the UAE and dozens of other countries that received Guantanamo detainees weren´t made public. But Ian Moss, a former chief of staff for the State Department´s Guantanamo envoy, insisted that, “We wanted these individuals after they were released to have a fresh start in life. It wasn´t part of the deal that they be incarcerated. That was never part of the deal.”

Moss blamed the current administration for lack of engagement, saying that “the Emiratis knew that the Trump administration didn´t care about what they did with these people or how they treated them. This is disgraceful.”

Lee Wolosky was the special envoy for Guantanamo closure from 2015 to 2017, the period when the Yemenis were transferred to the UAE. “I can categorically deny that there was a plan to keep the men in detention following their transfer from U.S. custody,” he said in an email.

Under Trump, only one prisoner, a Saudi, was transferred to Saudi Arabia to serve the remainder of his sentence after he agreed to a plea bargain.

Under Obama, a total of 197 were transferred to other countries, while 500 were transferred by George W. Bush. The U.S. base now has 40 detainees; most are being held without charges and a third are Yemenis.

Katie Taylor is deputy director of the United Kingdom-based group Reprieve and coordinator of the group´s Life After Guantanamo project. She told the AP that after documenting the lives of nearly 60 former detainees in 25 countries, “I have to say that the situation facing the men resettled in the UAE is among the worst and most troubling.”

It is not clear whether there are now 17 or 18 detainees in UAE hands; unconfirmed reports suggest one Yemeni left prison because of medical complications.

One detainee is represented by lawyer Patricia Bronte. (His name and the full names of all the Yemeni detainees are being withheld for fear that they might face retribution.) She recalled that State Department officials had told her and the detainees that they would be held from six to 12 months in a rehabilitation facility, and then they would be allowed to reunite with their families in the UAE.

“From early on, the assurances I have been given weren´t lived up to,” she said.

She has had no contact with her client since his arrival in the UAE in 2016. Families of the detainees say their communication with their loved ones has been infrequent, and troubling:

Abdo, 41, told his brother that he spent 70 days in solitary confinement blindfolded, handcuffed, and with hands and feet chained to the ground — upon his arrival. There was no rehabilitation or “de-radicalization sessions,” his brother Ahmed told the AP. Abdo and other detainees moved to a “filthy and dark prison” for 16 months.

“It was just terrible there,” the brother quoted Abdo as saying. He was later moved to al-Razin prison, located nearly 200 kilometers (125 miles) from Dubai, where human rights groups have documented abuses and torture.

In the spring of 2019, Abdo was brought back to the “filthy” prison, where he remains.

The brother quoted Abdo as saying, “It´s not what I thought. I wish I return to Guantanamo … it´s 1,000 times worse here.” Then the phone call was cut off.

Bir, a 41-year-old nurse, was identified by Guantanamo´s Periodic Review Board in 2015 as a “low-level Yemeni militant” who was arrested in Pakistani raids in Sept 2002 and transferred to Guantanamo.

His brother, Hussein, told the AP that despite earlier promises of a new life, his brother ended up in “mysterious conditions. We know nothing.”

“He continues to live behind bars with other Yemeni detainees, they are facing the most brutal injustice in the history,” Hussein said. In phone calls every 10 days, he said, “He says nothing except for, ‘How are you?´ He can´t speak. They are banned.”