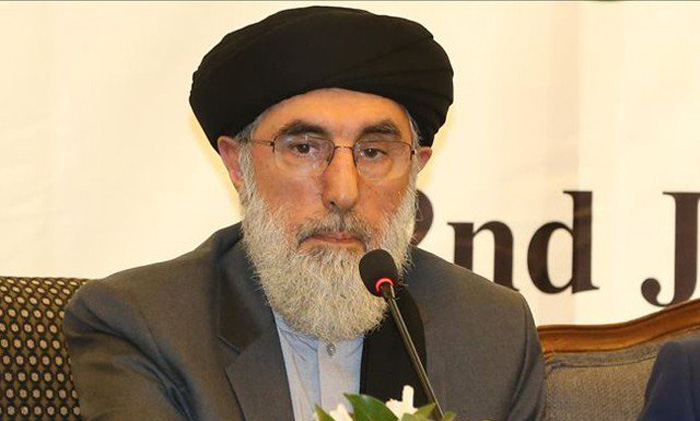 Hizb-e-Islami Afghanistan chief Gulbuddin Hekmatyar hoped on Wednesday that Americans will not commit the deadly mistake of the erstwhile Soviet Union, who had installed their puppet government in Kabul before leaving Afghanistan.

“The only durable solution for peace in Afghanistan is that the US should withdraw its troops and a non-aligned, independent and sovereign government should be formed by Afghans in light of their beliefs and traditions without any interference; otherwise the country would slither into another civil war,” the Afghan leader said, as he wrapped his three-day visit to Pakistan.

Hekmatyar addressed a large number of foreign policy analysts, practitioners and journalists at an exclusive talk organized by Institute of Policy Studies, Islamabad, at the conclusion of his visit to Pakistan on the invitation of the Ministry of Foreign Affairs.

“Unfortunately some countries think a gap will be created once the US leaves Afghanistan, which they will be able to fill,” he said, and warned rival countries against transferring their hostilities to Afghan soil. “Afghanistan should not be used by the US against Russia, by India against Pakistan, and by Iran against Saudi Arabia,” he added.

Hekmatyar said Afghan businessmen invested about 20 billion dollars in other countries including Turkey and the Gulf states during the war. He suggested that Pakistan should facilitate Afghan investors and businessmen thus enabling them to bring their investment to Pakistan. The facilities he termed essential in this regard include permission to open bank accounts, buy property on the basis of Afghan passports and long-term visas like those provided by certain European countries.

The Afghan leader, who met the top-level leadership including Prime Minister Imran Khan during his three-day visit to Pakistan, said he had held talks with Pakistani officials in this regard and was hopeful that it would be implemented soon.

Hekmatyar, who has twice served as Afghan prime minister in the 1990s, said it was the requirement of justice that those who have sacrificed for Afghanistan for so many years should have the right to govern the country now. “Afghan groups should have the opportunity to enter into negotiations with each other at a neutral venue. The discussion agenda would be withdrawal of the US from Afghanistan and an independent sovereign government. The other national issues such as constitution and type of government should be left for later after peace is restored. These are national issues and no external forces have the right to decide about these matters,” he said.

He said the US has been defeated in Afghanistan without achieving any goals and considers the corrupt and incompetent Kabul government the main reason for its failure, adding it will be a mistake if the US now adopts another policy other than leaving Afghanistan.