15 dead in stampede near Pakistani consulate in eastern Afghanistan 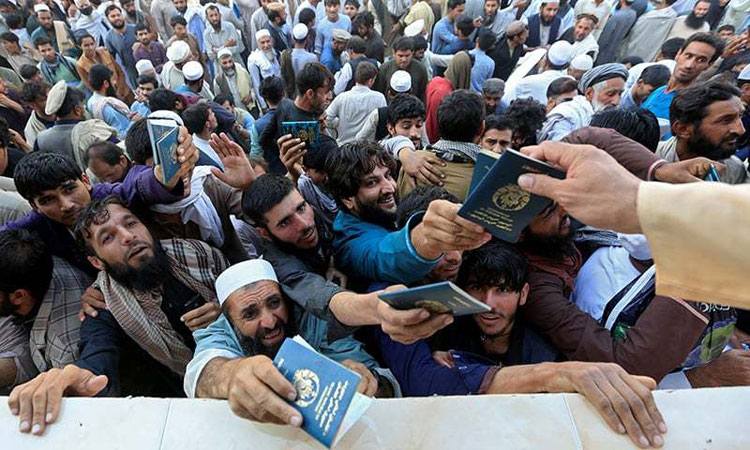 At least 15 people were killed in stampede among thousands of Afghans gathered outside Pakistan’s consulate on Tuesday as jostling broke out between people applying for visas, officials in the eastern city of Jalalabad said.

An estimated 3,000 Afghans had congregated on the open ground outside the consulate, waiting to collect tokens needed to apply for a visa, two provincial officials told Reuters a day after the tragedy.

An Afghan news channel transmitted images of them holding passports aloft to secure a token. Images taken after the stampede showed scores of passports strewn across the ground.

A survivor described to Reuters how tempers frayed and the crowd became unruly in the lead up to the stampede. “I stood in the queue all night but at some point people got angry and started pushing, many of us fell on the ground,” said Farmanullah, who goes by a single name.

Sohrab Qaderi, a provincial council member in eastern Jalalabad city, where the incident occurred said of the 15 people dead, 11 were women and several senior citizens were wounded.

“The visa applicants jostled to secure their token from the consulate officials […] the crowd got out of control, leading to a stampede,” said an official in Jalalabad.

Pakistan’s Ambassador to Afghanistan Mansoor Ahmad Khan said that he was “deeply saddened” at the casualties reported.

“We sympathise with the families of the victims. We are engaged with Afghan authorities for better facilitation of visa applicants. We are committed to continue issuing visas to Afghan nationals under [a] new visa policy while making the process smoother and streamlined at our end,” he said.

Tens of thousands of Afghans every year travel to neighbouring Pakistan to secure medical treatment, education and jobs. The two countries share a nearly 2,600-kilometre border.

Pakistan hosts about 3 million Afghan refugees and economic migrants, who have fled violence, religious persecution and poverty in their war-torn country.

Pakistan on Wednesday expressed grief over the loss of lives in a stampede at a stadium in Afghanistan’s Jalalabad city, where aspirants of Pakistani visas had gathered, and also urged upon the Afghan authorities to ensure better management of the process.

“We have received with sorrow and grief the news about the loss of precious Afghan lives and injuries in a stampede at a stadium in Jalalabad, several kilometres away from the Consulate General of Pakistan, where applicants for Pakistani visas were being gathered under the arrangements of the provincial Afghan authorities,” the Foreign Office said.

The Pakistan Consulate had resumed the visa operation after a pause of seven months as a security precaution due to coronavirus pandemic.

“While the Embassy of Pakistan and the sub-missions in Afghanistan are committed to implement this new visa policy and to extend maximum facilitation to the visa applicants, we would request the understanding and cooperation of the Afghan people as well as the Afghan authorities to ensure better and secure management of the visa applicants,” the Foreign Office said in a statement.

The statement mentioned that given the large number of visa applications, the Government of Pakistan had recently announced a new visa policy to facilitate Afghan brothers and sisters.

“The embassy of Pakistan in Kabul and the sub-missions in Jalalabad, Kandahar, Herat and Mazar-e-Sharif are now issuing multiple entry visas to Afghan applicants intending to visit Pakistan for family, business, medical treatment, education and other purposes,” it said.