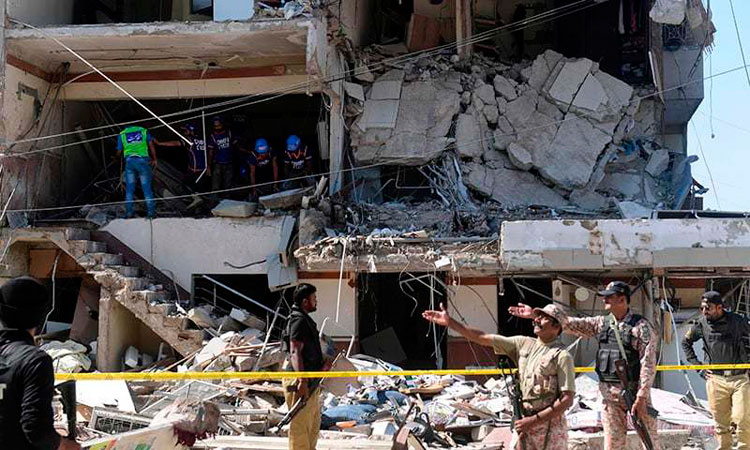 At least five people died and 20 others were injured in an explosion in a multi-storey building near Maskan Chowrangi in Karachi’s Gulshan-i-Iqbal area on Wednesday, according to officials from the Edhi Foundation.

All injured and deceased were taken to Patel Hospital, the officials added.

Footage showed the infrastructure of the building was badly damaged. The blast was suspected to have taken place on the second floor of a building. Eyewitnesses reported that windows of nearby buildings as well as some vehicles were also damaged.

Law enforcement agencies cordoned off the area while a bomb disposal squad arrived to investigate the cause of the blast. According to the initial report, the explosion occurred due to a “leakage of gas”. The report further said that no trace of an improvised explosive device (IED) was found at the scene. However, the squad found pieces of metal and the burner of a stove.

Sindh Chief Minister Murad Ali Shah took notice of the incident and directed the Karachi commissioner to submit a detailed report in this regard.

He also directed authorities to ensure medical treatment for those injured in the incident and expressed grief over the deaths reported.

Speaking to the media, Karachi Administrator Iftikhar Shallwani reiterated that the nature of the blast could only be determined after an inquiry. He stated that officials from the Sindh Building Control Authority were present at the scene.

“As you can see the building is damaged, it will have to be demolished,” he said.

PPP Minister Saeed Ghani, who visited the site of the blast, said that it seemed the explosion occurred in a residential building. He added that the cause of the blast would be determined later.

Responding to a question, Ghani said it could not be confirmed whether the explosion was a terrorist attack until further investigation was conducted.

Sindh Inspector General of Police Mushtaq Mahar also took notice of the incident and directed the senior superintendent of police (SSP) East to “immediately submit” a report on the details of the blast and steps taken by the police.