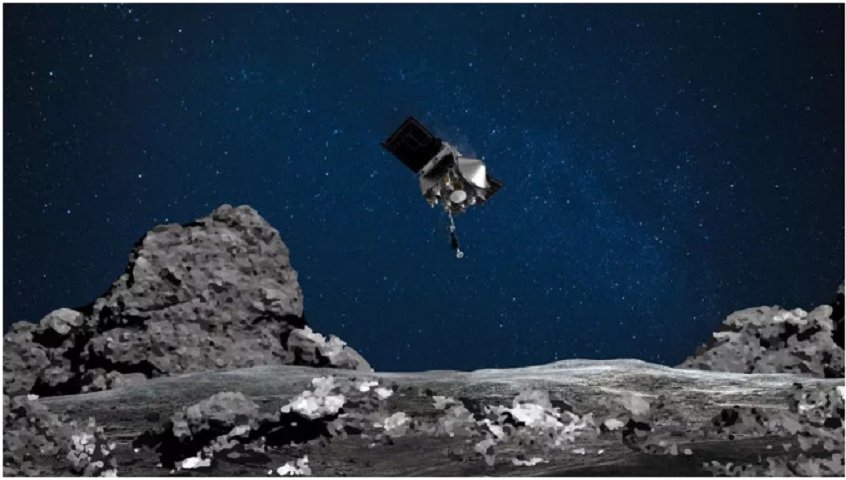 WASHINGTON: After a four-year journey, NASA’s robotic spacecraft Osiris-Rex will descend to asteroid Bennu’s boulder-strewn surface on Tuesday, touching down for a few seconds to collect rock and dust samples in a precision operation 200 million miles (330 million kilometers) from Earth.

Last year, Japan managed with its Hayabusa2 probe to collect some dust from another asteroid, Ryugu, and is now on its way home.

With Osiris-Rex, NASA hopes to collect a much larger sample – at least 60 grams – which it hopes will reveal the original ingredients of the solar system.

The spacecraft, about the size of a large van, is at this moment in position about a kilometer above Bennu, which is 490 meters (1,600 feet) in diameter.

Engineers from NASA and Lockheed Martin sent it its final commands on Tuesday to carry out the sampling operation, which will be fully automated.

“We aren’t able to ‘joystick’ the spacecraft in real time,” said Kenneth Getzandanner, flight dynamics manager for the mission.

At this distance, it will take about 18.5 minutes for signals to travel between them.

The first confirmation signal for the operation will arrive on Earth at 6:12 pm Eastern Time (2212 GMT) on Tuesday.

The first images will reach us on Wednesday, but we will have to wait until Saturday to find out if Osiris-Rex has succeeded in collecting the desired amount of dust.

“It’s not easy to navigate around a small body,” said Heather Enos, the project’s deputy principal investigator, who has spent 12 years on the mission preparing for this moment.

It will all boil down to 16 critical seconds of contact, during which time an arm will reach out and blast the surface with compressed nitrogen, then collect samples measuring two centimeters in diameter or less.

“We can’t actually land on the surface of Bennu so we will only be kissing the surface,” added Beth Buck of Lockheed Martin.

The interest in analyzing the composition of the asteroids in the solar system is that they are made of the same materials that formed the planets.

It’s “almost a Rosetta stone, something that’s out there and tells the history of our entire Earth, of the solar system during the last billions of years,” said NASA’s chief scientist, Thomas Zurbuchen.

The samples will return to Earth on September 24, 2023, with a planned landing in the Utah desert.

Not all samples will be analyzed immediately, like those brought back from the Moon by the Apollo astronauts, which NASA is still opening up 50 years later.

The samples “will also allow our future planetary scientists to ask questions we can’t even think of today are using analysis techniques not yet invented,” said Glaze.

The team estimates that the chances of a last minute cancellation are around six percent.

Around 1:50pm (1750 GMT), it will fire its thrusters to align itself with the correct side of the asteroid at a distance of only 100 meters.

A second maneuver will turn the probe towards the surface and lower it to 50 meters. The last maneuver will slow it down to 10 centimeters per second.

At five meters above the ground, an automatic system on board can cancel the operation if it detects rocks that are too large at the point of contact.

That’s because Bennu isn’t the smooth asteroid, covered in a harmless “beach” of fine sand, that NASA was hoping for.

NASA chose this particular asteroid because it is conveniently close and also ancient: scientists calculated it formed in the first 10 million years of our solar system’s history, 4.5 billion years ago.

After Osiris-Rex reached the rock at the end of 2018, the scientists were surprised to receive photographs showing that it was covered with pebbles and boulders sometimes 30 meters high.

They have since mapped the asteroid to centimeter resolution, and chosen the least risky landing site: it is called Nightingale Crater, 25 meters (80 feet) wide, with a target zone just eight meters (26 feet) in diameter for the “kiss.