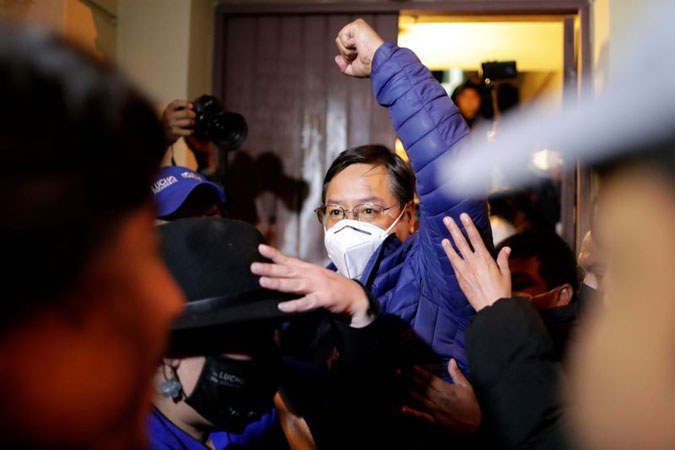 The win, still to be confirmed by the official count, would sweep the party of leftist Morales back into power a year after he was forced to resign following a fraught election that sparked widespread protests and violence.

The socialist MAS party’s candidate Luis Arce, 57, took more than 50% of the votes, rapid counts showed, with Mesa on around 30%, a far larger gap than pollsters had predicted.

“The result of the quick count is very strong and very clear,” Mesa said at a press conference after the socialist party had claimed victory in the early hours of the morning. “The difference between the first candidate and (our) Comunidad Ciudadana party is wide and it is up to us, those of us who believe in democracy, to recognize that there has been a winner in this election.”

Arce’s team on Monday said that the initial results looked “hard to change” but that the former finance minister during Morales’ near-14 year socialist administration would only make a statement once the official results were complete.

That process may take several days. The official count on Monday afternoon had tallied around a quarter of the votes, showing Mesa slightly ahead but widely expected to gradually fall back as more votes were counted from MAS strongholds.

The result is a body blow for Bolivia’s conservatives, who had hoped to present a new model for the country beyond Morales, who sought an unprecedented fourth term last year despite term limits, which had led to protests again him.

Arce, a close Morales ally, may bring a more moderate and technocratic stance than his former boss, who oversaw stable growth and elevated indigenous groups but drew criticism for an authoritarian streak and trying to hold on too long to power.

“This could be the beginning of a new era for the MAS party, replacing Evo,” said Franklin Pareja, a political analyst. The win could also see Morales return from exile in Argentina, where he has been living since fleeing the country after his resignation last year, when he claimed there had been a right-wing coup against him.