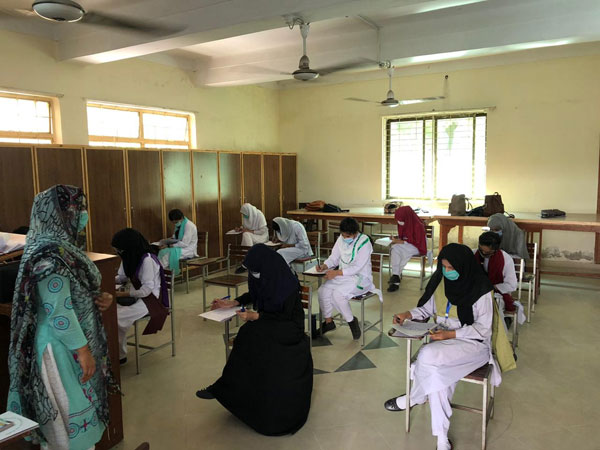 Under the supervision of NAB Lahore’s A&P Wing, an essay writing competition (English) has been organized at Govt Post Graduate APWA College for Women which was participated by Colleges from 17 Districts of Punjab.

The students were asked to opine over the topic “How we can stop Corruption” whereas, the event was supervised by Director Colleges, Lahore Mr. Ziaur Rehman and Director A&P Wing, NAB Lahore, Syed Muhammad Husnain.

The other Essay writing Competition (Urdu) was commenced at Govt College for Boys Township, Lahore over the topic of “Pakistan mein Corruption kay asbaab aur unka mumkina hall”. Hundreds of students participated in the competitions and finally the jury would decide the best three Essays as toppers both in English and Urdu categories who would be awarded on annual international anti-Corruption Day event to be held on 9th December 2020.

NAB Lahore conducts various awareness activities for educating the youth about the ill effects of corruption and corrupt practices. In this regard, Awareness and Prevention Wing of NAB Lahore has intensified the Awareness campaign against corruption and is using different forums for spreading the message of “Say No to Corruption”. The activities to commemorate the international anti-corruption day being celebrated on 9th December every year, have been launched in which multiple competitions would held among students of Primary, College and University level students. The competitions include poetry, Essay writing, declamation, paintings etc and the winners are awarded with cash prizes, appreciation certificates and shields on anti-corruption day.