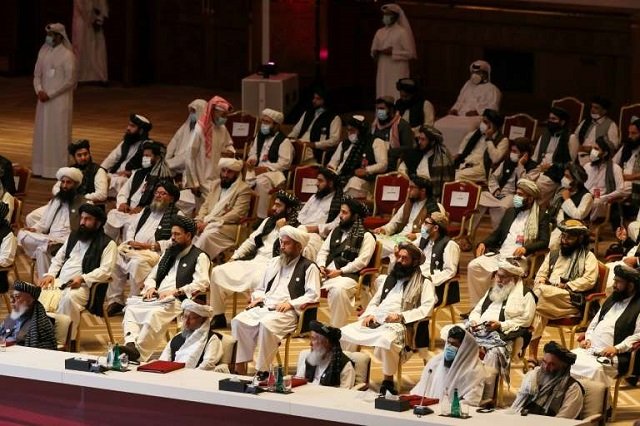 KARACHI: While the world is awaiting progress in the intra-Afghan talks with bated breath, an expert says the current phase in war-torn Afghanistan is a kind of “make-or-break”, that could either lead to a political settlement or push the country into a new civil war.

On Sept. 12, representatives from the Afghan government kickstarted intra-Afghan peace talks, by meeting Taliban members in Doha, Qatar to bring curtains on the 19-year long war in the country.

In an exclusive interview with Anadolu Agency, Syed Abrar Hussain, who served as Islamabad’s top diplomat in Afghanistan from 2014-2017, said the journey to peace is up for a “bumpy ride,”. He predicted that the fragile process will witness many ups and downs in the days to come.

According to the former envoy, not only the future of Afghanistan, but the fate of the landmark Doha peace accord reached in February between the US and the Taliban is linked to the outcome of the intra-Afghan dialogue.

“All eyes are on the intra-Afghan dialogue, which no doubt is a bumpy ride and requires a lot of giving and take from all sides, mainly from the Kabul government and the Taliban,” said Hussain, whose book Afghanistan: Mullah Omar Se Ashraf Ghani Tak (From Mullah Omar to Ashraf Ghani) has recently hit the stands.

He said the foremost task for the Afghan leadership during the dialogue would be to agree on the future political setup.

“At this stage, you can only guess about that. It could be an interim setup, sort of a broad-based government of all Afghan parties to implement the agreement or hold new elections under an amended or new constitution or something else,” he said.

Known as an expert in the affairs of Afghanistan, Hussain has served as a diplomat in the country more than once. Besides, he also served at the Afghanistan desk at the headquarters of Pakistan’s Foreign Ministry. He was Pakistan’s consul general in Kandahar during the Taliban regime and had been in touch with Mullah Omar, Taliban founder and supreme leader.

He said before agreeing on a future political setup, the two sides need to hammer out an agenda, such as reducing violence levels, agreeing on a ceasefire and amendments in the constitution.

He also warned that the failure of the current peace process will bring more disaster and will lead to a new civil war in the country.

Asked, if the Taliban have changed their stance, Hussain said the many ups and downs and war fatigue has brought changes in both sides. He appeared hopeful about change in militia’s otherwise radical stance, particularly about women rights.

“The Taliban have certainly changed over the years. They have seen so many ups and downs. At the same time, there is war fatigue on both sides. So, both parties will try to find out a middle path. They are not Taliban of 20 years ago. I am pretty sure that they will be able to adjust,“ he said.

Replying to a question about the difference between Mullah Omar, and Mullah Haibatullah, the current supreme leader, Hussain said while he does not know the current leader personally, but an overall attitude and commitments are reflecting a change.

The former envoy said while Kabul’s Chief Negotiator, Abdullah Abdullah, and former Prime Minister, Gulbadeen Hekmatyar will play a role in the Afghan politics for, over a long time, there is not much hope for the continuance of President Ashraf Ghani.

“It all depends on the results of the ongoing dialogue. But having said that I see a role in the Afghan political system for Abdullah Abdullah, and Gulbadeen Hekmatyar who have their parties and a following in Afghanistan,” he said adding that “Ashraf Ghani has been president twice and does not seem to have a role after his term is over.”

Total US withdrawal will lead to civil war

Commenting on the planned pullout of US forces from Afghanistan by December this year, Hussain cautioned that any “total withdrawal” before a negotiated settlement through Intra-Afghan dialogue could trigger a civil war. He said Afghan forces are strong enough, but lack of air support, they will face a difficult situation.

While US President Donald Trump has promised a pull out by this Christmas, his Joint Chiefs Chairman General Mark Milley stressed that pulling out of the final 4,500 troops would depend on reduction in violence and other conditions agreed in February with Taliban.

Trump’s National Security Adviser Rober O’Brien has also clarified that the US troops in Afghanistan would be cut to 2500 in the first two months of 2021.

“I don’t think it’s going to be a hurried pull-out. But the US would not be able to wait indefinitely. Now it all depends on Afghans; they need to make progress in dialogue and reach an agreement in the next few months,” he said.

Hussain’s memoirs offer an arresting account of events, he witnessed, as an insider.

Describing his five years stay- three years as ambassador and two years as consul general- as the most exciting and important period during his 35-year diplomatic career, he has recorded his many meetings with Mullah Omar in Kandahar.

He was also part of a Pakistani delegation that tried to persuade Mullah Omar not to destroy the historic statues of Gautama Buddha in northern Bamyan province of Afghanistan in Dec. 2001.

The former envoy has also recorded an interesting anecdote, when he had to spend a whole night in a vehicle, in freezing temperature of November 1999, along with his staff in the outskirts of Kandahar as intelligence had poured in that the US was attacking the city with cruise missiles.

“I was asked to convey the information to the Taliban leadership. I along with a coworker reached the residence of Mullah Omar, which was merely 500 meters from Pakistan consulate. A guard standing on the gate informed Mullah Omer’s Secretary Tayyeb Agha, who immediately came to meet us. We conveyed the information, and left in a hurry to decide for our safety,” said Hussain.

However, the intelligence proved incorrect.

Hussain has accused Maulvi Ghulam Haider, Kandahar chief of Taliban’s moral police for having a grudge against Pakistan.

“Haider was behind the arrest and shaving heads of a Pakistani football club members for playing in shorts in a friendly match against a local club in July 2000. The players were released after one day of imprisonment on the Taliban government’s intervention,” he has recorded in his memoir.