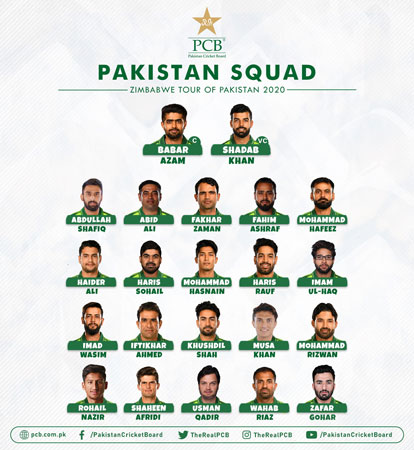 LAHORE: Pakistan cricket selectors, headed by Misbahul Haq, on Monday dropped veterans Shoaib Malik, Mohammad Amir and Sarfaraz Ahmed from a list of 22 probables named for the upcoming series against Zimbabwe. Pakistan will play three one-day internationals and equal numbers of Twenty20 internationals against the visitors in Rawalpindi and Lahore. The Zimbabwe squad are reaching Islamabad on Tuesday (today). They will then undergo an isolation period from October 21 to 27 before they can start training at the Pindi Cricket Stadium from October 28. Rawalpindi will be hosting the ODIs on October 30, November 1 and 3 while Lahore will host the T20 series on November 7, 8 and 10. Pakistan have not played ODIs since the home series against Sri Lanka 12 months ago and the Rawalpindi matches will be part of ICC Men’s Cricket World Cup Super League from which the seven top-ranked sides, apart from hosts India, will qualify directly for the ICC World Cup 2023. Babar Azam will lead both the squads while Shadab Khan has been named vice-captain in both the formats.

Abdullah Shafiq, the uncapped 20-year old, top order batsman has found a place following strong performances for Central Punjab in the recently-concluded National T20 Cup. Shafiq, who hails from Sialkot, made a stunning century on T20 debut to help Central Punjab pull off a remarkable chase of 201. He finished the tournament with 358 runs in 10 innings, striking them at 133 with an average of 44.75. These include two half-centuries and a century. Shafiq has also made a century in his only first-class appearance so far, making him the first Pakistani and second in cricket history to manage debut hundreds at both the first-class and T20 cricket. Although the squad have been named for the full tour, the team management and the Pakistan selectors will pick a squad for the ODIs and T20Is from this pool. A big pool has been picked to ensure all players can comply with strict covid-19 protocols in a bio-secure bubble that will be in place for the full series.

Addressing a news conference, head coach Misbah insisted he had opted for experience in the 50-over matches and provided extended run to the youngsters in the T20I format. “I want to categorically state that careers of Malik, Amir and Sarfaraz are not over by any means as performance remains the only criterion for selection. These are strategic decisions as Malik’s absence will provide players like Abdullah Shafiq, Haider Ali and Khushdil Shah better chances of featuring in the upcoming matches. We have followed the same philosophy while leaving out Amir and Usman Shinwari so that bowlers like Mohammad Hasnain, Musa Khan and Haris Rauf can get an extended run. Mohammad Hafeez and Wahab Riaz provide us that useful experience in the batting and bowling, respectively, that will benefit the youngsters,” he added.

For the Lahore T20Is, the selectors have preferred continuity and consistency, while acknowledging the just concluded National T20 Cup had provided some exciting talent, which will be considered for Pakistan’s next month tour to New Zealand and early next year’s home T20Is. Misbah said fast bowlers Hasan Ali and Naseem Shah were not considered for selection as they were recovering from injuries. “But they have been advised to play in the Quaid-e-Azam Trophy to prove their fitness before they are considered for selection.”

Misbah said the present T20I squad already comprised youngsters who had played very few matches. “As such, it is logical and sensible that we give them the support and confidence by providing them extended runs so that they can show what they are capable of at the highest level and cement their places for future assignments. We have resisted the temptation of experimenting in the ODIs for three simple reasons. Firstly, we cannot afford to be complacent and have to respect each and every opponent irrespective of their strength or international ranking. Secondly, every ODI counts as it leads towards automatic qualification for the ICC World Cup 2023, and thirdly, we have not played any ODI cricket in the past 12 months.”

The probables will assemble in Lahore on October 21 for Covid-19 testing and after observing a five-day isolation period, during which they will play two 50-over matches at the Gaddafi Stadium, will travel to Rawalpindi on Monday, 26 October. The probables for three T20Is will be shortlisted after the ODIs and players unlikely to feature in them will be advised to play in the Quaid-e-Azam Trophy third round matches, which will commence from 6 November.

Pakistan probables for ODIs and T20Is: