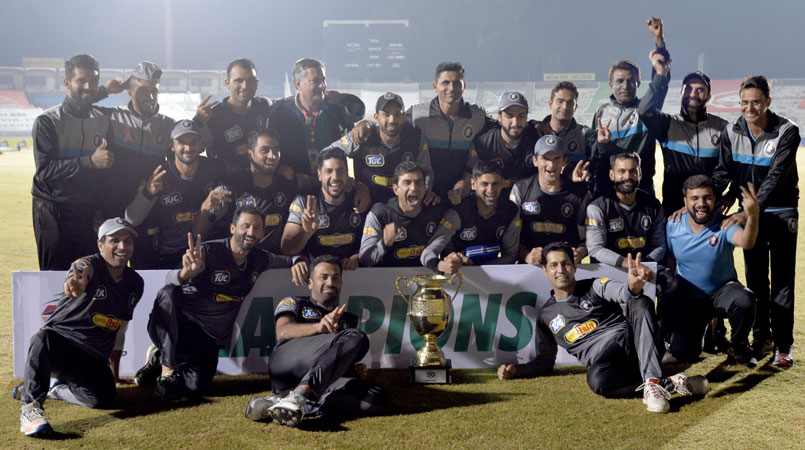 RAWALPINDI: Inspired by scintillating half-centuries from veteran Shoaib Malik and Fakhar Zaman followed by a disciplined bowling effort led by Shaheen Shah Afridi (three for 36) and Wahab Riaz (three for 36) helped Khyber Pakhtunkhwa lift the National T20 Cup for First XI teams against Southern Punjab in a well-contested final played at the Pindi Cricket Stadium here on Sunday night. Khyber Pakhtunkhwa recorded a 10-run win as their bowlers successfully defended a 206-run score. The Mohammad Rizwan-led Khyber Pakhtunkhwa collected a winning prize of Rs5million while the Shan Masood-led Southern Punjab pocketed Rs2.5million. Chasing a mammoth 207-run target, Southern Punjab got off to a poor start as tournament’s highest wicket-taker Shaheen (20 wickets) sent Shan (7) and Sohaib Maqsood (0) packing inside the first three overs. Big-hitter Zeeshan Ashraf perished while attempting a big shot off Wahab to leave his side tottering at 34 for three in 5.2 overs.

Hussain Talat and Khushdil Shah brought Southern Punjab back in the hunt with a 74-run partnership off a mere 43 balls. Usman Khan Shinwari at this stage struck a crucial blow when he dismissed Khushdil who was smartly caught by Fakhar for 34 off 24 balls (two fours, three sixes). Hussain fought hard for Southern Punjab with a stroke-filled 63 off 33 balls, the left-hander hit six fours and three sixes before his innings was cut short by brilliant diving catch by Malik at the long-on boundary off Wahab. Hussain’s dismissal left Southern Punjab reeling at 131 for five, needing another 76 off 34 balls. Saif Badar perished cheaply for five runs; Aamer Yamin fell for 13 to Wahab as the match slipped out of Southern Punjab’s reach.

All-rounder Muhammad Imran played some big shots at the end of the innings, the right-hander finished 38 not out (13 balls, four sixes, two fours) Southern Punjab ended their innings at 196 for eight. Reflecting on his performance, man-of-the-match Malik said: “I think your goal is to give your best shot always, at times you do well, at times you don’t. I want to thank my management, especially coach Abdul Razzaq and captain Mohammad Rizwan for backing me when I needed their backing the most as I was struggling. The opponents bat very deep that is why we wanted to post a big total today, I wanted to bat deep and keep attacking. Our bowlers got early wickets which really helped set-up the win, I backed myself while batting and I am happy that my contribution helped the team.”

Khyber Pakhtunkhwa, who were asked to bat first, started their innings on a positive note with openers Fakhar and Rizwan adding 76 runs for the first-wicket in 9.3 overs. Rizwan was run out on a direct throw from wicketkeeper Zeeshan for 25 off 30 balls (one four, one six). Fakhar who during the course of his 67-run innings went past Khurram Manzoor as the highest run-getter of the tournament (420 runs, 35 avg, 147.88 SR, five 50s) hit a typically aggressive half-century before he was dismissed by Aamer. He faced 40 balls and hit seven fours and three sixes. Khyber Pakhtunkhwa then lost Iftikhar Ahmed (1) to leg-spinner Zahid Mahmood which left them 126 for three in 14.4overs.

At this stage, the two seasoned campaigners Mohammad Hafeez and Malik made the most of some fielding and catching lapses by the Southern Punjab fielders to add 51 runs in a mere 26 balls. Hafeez was dismissed for 38 off 26 balls (two fours, two sixes). Malik who had completed 10,000 T20 runs during the course of the tournament played a magnificent innings to propel Khyber Pakhtunkhwa past the 200-run mark. The right-hander hit four sixes and three fours in his unbeaten 56-run innings off 22 balls. Malik’s onslaught helped Khyber Pakhtunkhwa add 73 runs in the last four overs. Zahid, Aamer and Imran took a wicket apiece for Southern Punjab.