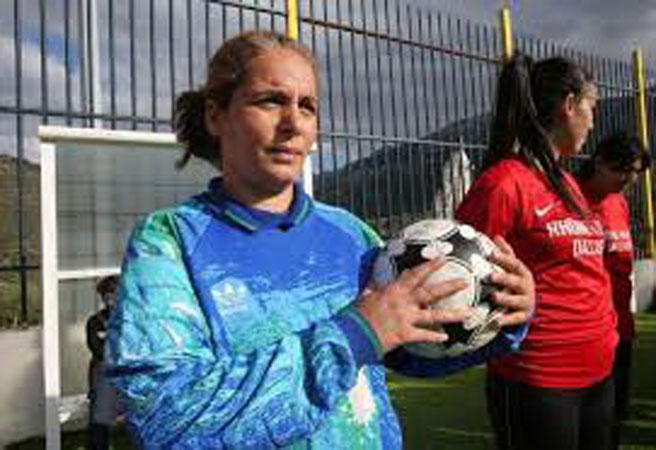 SAHEL: Algerian women in bright Berber dress ululating, singing and beating drums at a soccer tournament last week were pushing their fight for gender equality — a cause that has come under greater scrutiny in Algeria after a brutal attack this month. The quiet cobbled village of Sahel was hosting the third annual competition between female teams in the mountainous Kabylie region to push for a bigger role for women in Algerian society. “Women before weren’t free, weren’t allowed to work outside of the house … now we have rights, we can be lawyers, pilots, or do any other jobs, and we are equal to men,” said Houria Hamza, one of the players. The cause of women’s rights in Algeria has gained traction in recent weeks after the rape and murder of a young woman whose alleged assailant had already been accused of attacking her years earlier.

The case has prompted outrage and protests in Algiers, despite a public ban on demonstrations because of the coronavirus pandemic. Police have arrested a suspect. “They don’t have a heart and they don’t have a brain. Those who kill deserve to be killed,” said, Naima, 52, a Sahel villager who did not want to give her last name, referring to men who attack women. In the Kaylie region east of Algiers, a bastion of Amazigh-speaking Berber culture, women had long held influential roles in society but a 1990s Islamist insurgency pushed many back into their homes.

Hamza, a 37-year-old housewife, helped her team to win the title after defeating the village of Tabouda in a penalty shootout cheered on by dozens of women clapping and chanting. “There is a lot for women to achieve. Just as much as men. Maybe even more than men,” said Fadila Bekkouche, head of the village’s women’s association.