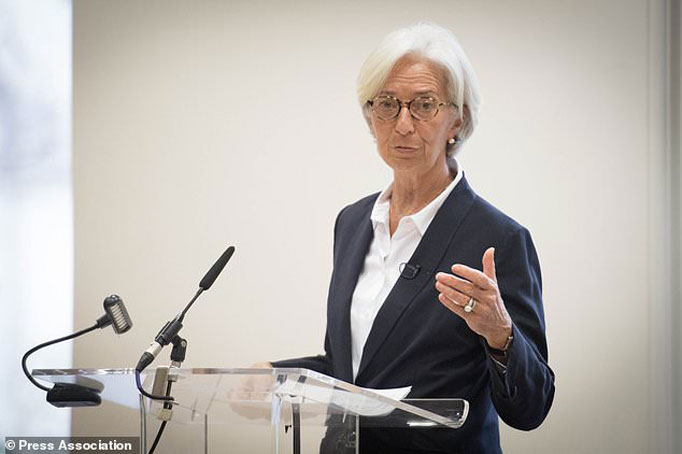 The head of the European Central Bank says the economic recovery from the coronavirus pandemic “risks losing momentum” due to the second wave of infections. Speaking in an interview with the French newspaper Le Monde that was published on the ECB’s website, Christine Lagarde also said that more stimulus could be added if necessary. “The second wave of the pandemic in Europe, notably in France, and the resulting new restrictions are adding to the uncertainty and weighing on the recovery,” she said. “Since the rebound we saw over the summer, the recovery has been uneven, uncertain and incomplete and now risks losing momentum,” she went on, adding that “the options in our toolbox have not been exhausted. If more has to be done, we will do more”.

The ECB is already supporting the economy with a pandemic emergency programme of bond purchases that are pumping 1.35 trillion euros (£1.22 trillion) in newly created money into the economy, a step that lowers market borrowing costs and helps keep credit flowing to businesses. Analysts think the bank may eventually add more stimulus due to weak inflation and slowing growth because of the upsurge in infections, and to help deal with any new restrictions on travel and activity that may be imposed by governments to slow the spread.

The bank holds its next policy meetings on October 29 and December 10 but can act at any time. The bank foresees the eurozone economy shrinking by a total of 8% this year due to a sharp plunge during the worst of the lockdowns in March and April, followed by a recovery. Low inflation is one reason analysts who follow the bank think more stimulus is on the way. Annual inflation was minus 0.3% in the 19-country eurozone in September, down from minus 0.2% in August. While the negative figure has been influenced by one-time factors such as a cut in VAT in Germany, weak inflation also can be a sign of an underperforming economy. The ECB’s goal is below but close to 2%. In addition to the bond purchases, the ECB has held its interest rate benchmarks at record lows. Its rate for short-term lending to banks is zero and for deposits left overnight from banks, the rate is minus 0.5% The negative rate means banks pay a penalty for leaving money at the central bank instead of lending it to business.