As US election looms, Europe weighs risk of a disputed result 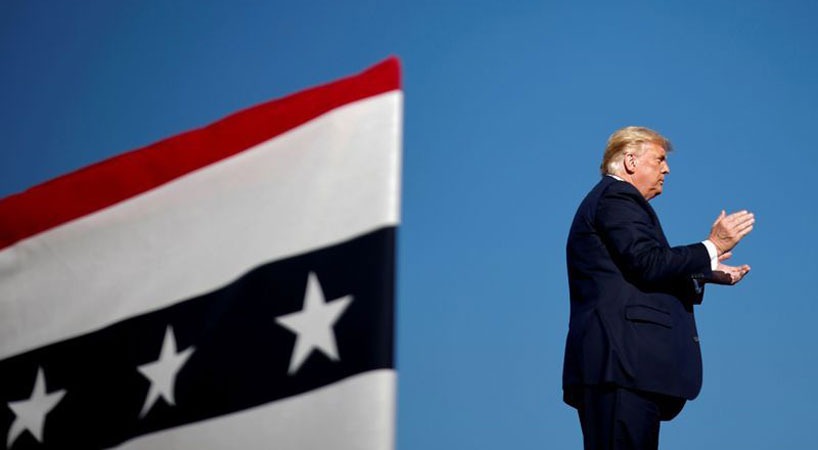 With less than three weeks until the US presidential election, European capitals are concerned about the risk of a disputed outcome and the impact it would have in the United States and abroad.

While Democrat candidate Joe Biden leads in opinion polls, the 2016 election produced a split between the popular vote and the Electoral College. Analysts say that remains possible on Nov. 3.

With Trump equivocating on whether he would accept a peaceful transfer of power if he loses, and suggesting the Supreme Court may have to decide the winner, the risk of a contested result is significant.

One British bookmaker is offering 9/4 that Trump will lose the popular vote but be re-elected, odds that imply a 69% probability. A poll of global fund managers by Bank of America found 60% expected the result to be disputed.

In major European capitals, where many quietly hope the election will produce a change of president and a shift in US policy on issues from climate to trade, NATO and the Iran nuclear deal, caution prevails.

“The majority of EU governments hope for a Biden victory, although no one would say that,” said one EU diplomat.

“Governments are looking at scenarios, contingency plans, although it remains to be seen what could be done in the case of Trump contesting the result.”

German officials have been thinking through the implications for months – since Trump raised doubts about whether he would accept the outcome. “We analyse what could happen, different scenarios,” one said.

Presidential elections have been disputed in the past, as in 2000, when lawyers for Al Gore and George W. Bush spent a month arguing over a Florida recount that the Supreme Court ultimately decided in Bush’s favour.

But a dispute this time could last longer and be more unpredictable, officials say, including the risk of violence on the streets, legal challenges and the chance Trump refuses to vacate the White House.

That would have grave implications in a country already polarised over race and politics and battling the coronavirus.

Washington is in a trade dispute with China and trying to exert influence from the South China Sea to Yemen. A contested result could risk a leadership vacuum that Beijing, Moscow or Pyongyang might seek to exploit. Geopolitical analysts are concerned, for example, that China might move against Taiwan.

For Britain, it would create more uncertainty as a potential no-deal Brexit kicks in on Jan. 1, and as London tries to clinch a trade deal with Washington.

Britain’s Foreign Office says it is “ready for any outcome”.

For France, it could mean the difference between the United States fully withdrawing from the Paris climate accord or potentially rejoining it under Biden.

NATO wants a strong US recommitment whether Trump or Biden wins, and countries in east Europe, always wary of Russia, want US security promises kept, including more troops in Poland.

“There are several concerns – one is that Trump will be reelected,” said a senior EU official. “The other big concern is that there might be violence on the streets in the US after the elections.”

“I think the game’s almost over,” said one. “For a long time we thought Trump would do it, but now, I don’t see it.”

Yet in Brussels, officials fear Trump’s return would mean another four years of tension. They are preparing for either outcome, while hoping that the result is accepted.

If Trump disputes it, one official said, “it would send Washington into political paralysis”. Brussels would have to look at “how quickly the rats leave the sinking ship”, including how quickly the Republican party distances itself from Trump.