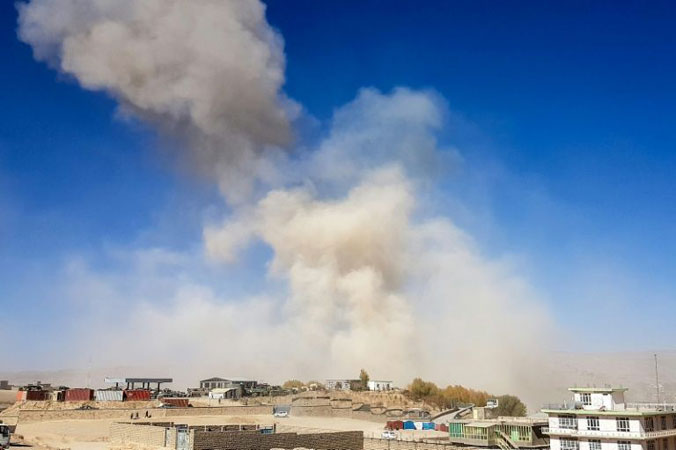 A top US envoy slammed Afghanistan’s “distressingly high” levels of bloodshed Monday after a car bombing at a police headquarters killed at least 16 people and wounded scores more.

The latest remarks by veteran diplomat Zalmay Khalilzad, who negotiated a withdrawal deal with the Taliban in February, come as spiralling violence across Afghanistan imperils ongoing peace talks between the Kabul government and the Taliban. “Continued high levels of violence can threaten the peace process and the agreement and the core understanding that there is no military solution,” Khalilzad said on Twitter. “Violence today remains distressingly high in spite of the recent reaffirmation of the need for substantial reduction.” On Sunday, a car bomb near the police headquarters in the western province of Ghor left 16 people dead and 154 wounded, local hospital head Mohammad Omar Lalzad told AFP on Monday.

Five children, nine women and 26 members of the security forces were among the wounded, he said. Aref Aber, the spokesman for Ghor’s governor, confirmed the toll. No group has claimed responsibility for the attack, but Afghan officials blamed the Taliban.

In the country’s southern province of Helmand, thousands of families have been forced to flee their homes in recent days as fierce fighting erupted between the Taliban and government forces. The violence continues even though Khalilzad last week claimed the Taliban had assured US forces they would reduce attacks and casualties. US influence over Afghanistan’s battlegrounds is on the wane, with the Pentagon looking to withdraw all its remaining troops by next May. President Donald Trump has said US forces should return even sooner, raising questions about Washington’s insistence that its withdrawal from Afghanistan after 19 years of war is really “conditions-based”.