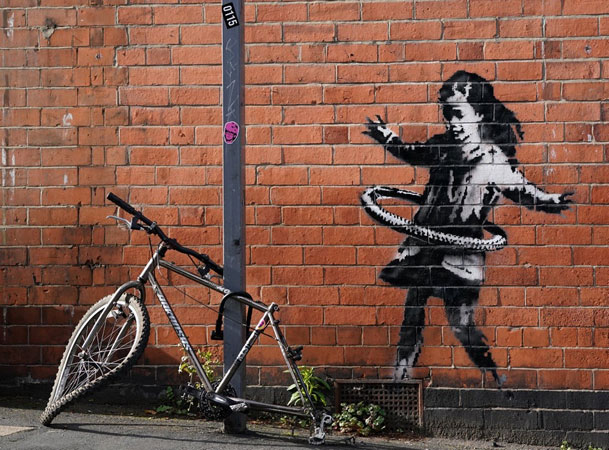 In what was ‘suspected’ as an artwork created by anonymous street artist Banksy in Nottingham in England, was confirmed by the artist two days later in a social media post. “Amazing,” the artist wrote on Instagram, with a picture of a young girl hula-hooping with the wheel of a bicycle, next to an actual bicycle that is missing a back wheel. The graffiti is located on Ilkeston Road in Radford, just outside a beauty salon, which is believed to be a popular residential area for students. According to a BBC report, after Banksy’s confirmation, people began to throng the place to have their photographs taken with the artwork, with as many as 30 people there at one point, along with some police officers. The report mentions that a Banksy expert by the name of Prof Paul Gough, from Arts University Bournemouth, was initially doubtful if it was the “real deal”, but later said he was “really pleased” the work was done by the artist. “It is curious. The last four or five have all related to Covid or something in the news. This is much more whimsical and much more of the moment. It is someone enjoying themselves.