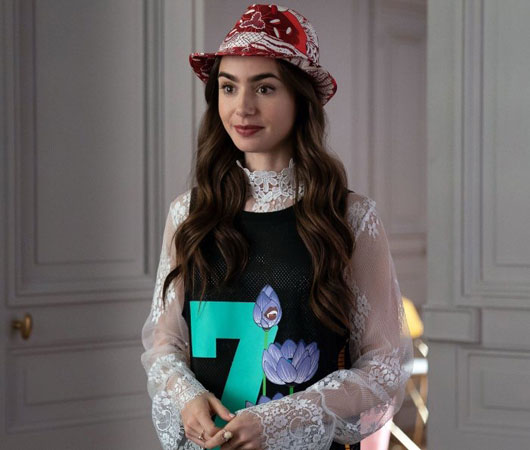 In the words of Taylor Swift: I don’t know about you, but Emily Cooper is not 22. That was the fan consensus after Lily Collins told British Vogue earlier this week her fashion-forward Emily in Paris character was a mere months out of college graduation.

“I don’t believe we’ve ever given her a specific ‘number’ for her age, but I believe that she’s pretty fresh out of college,” Collins told the publication. “Maybe this is her first year after graduation. I want to say she’s like, 22-ish.”

Now, the Netflix star, 31, has admitted she was wrong about the Chicago transplant’s age.

In her Oct. 16 Instagram Story, Lily wrote, “Emily looking at me when I get her age wrong,” alongside a GIF of a surprised Em. “Sorry girl.”

The actress added, “You might not be 22, but I gotta say – you do act like it sometimes!”

Lily walked back her comments around the same time that her co star, Lucas Bravo, shared his opinion on Emily’s real age.

“I would say she’s probably 24,” the French actor, who plays chef Gabriel, told E!’s The Rundown. “Something happens after 26 where women start exploring…in terms of personality. I feel like she’s still very strong willed and she has certainties, but yeah I would say around 24.”

Emily’s age is just one of many things fans are talking about regarding the new series.

Other Twitter chatter includes whether Gabriel and Emily, who hooked up despite Emily befriending Gabriel’s girlfriend Camille, should come clean about their feelings for one another. In an interview with Harper’s Bazaar, Lucas teased a very interesting twist on that drama.

“Well, I know that Camille really made a point to play Camille, as if she knew what was going on,” Lucas said of the love triangle. “She really played that card and left everything open. She planted the seed so anything could happen in Season 2.”

Sounds like it will be some very grown up drama, for a much more grown up Emily.