* Maryam says PML-N and PPP will fight only in political battleground
* Bilawal says his fight is not for power, but democracy 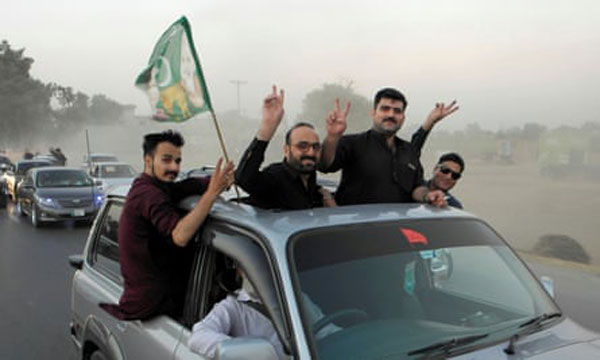 The Pakistan Democratic Movement’s (PDM) held its second anti-government power show in Karachi on Sunday, with leaders declaring in their speeches that Pakistan Tehreek-e-Insaf regime is set to go home and that 2021 is the year of general election in the country.

The PDM flexed its political muscle and held its first power show in Gujranwala on Friday, October 16, where it lashed out at Prime Minister Imran Khan and his government.

Addressing the rally, Maryam said that despite a ban on Nawaz’s live speech, Prime Minister Imran Khan commented on it. “If you are so troubled that you can’t allow the people to hear Nawaz’s speech, then stop providing your analysis on it.” “The speech that was delivered day before yesterday wasn’t aired on TV. Were you then hiding somewhere, secretly watching his speech?” she asked, taking a jibe at the premier.

Addressing Bilawal, she said that his mother (Benazir) and her father were like brothers and sisters. “Bilawal and I are continuing to honour that relationship.” “Let us make a promise Bilawal, that we will fight in the political battleground, and not against each other,” she said.

Maryam said that PM Imran Khan “is not worried in the least about the people, rather he always addresses the opposition, Nawaz, Maryam, Bilawal, or the ones who brought him into power”. Referring to Prime Minister Imran Khan’s Saturday speech, she says that the premier is “troubled” after one jalsa.

PPP Chairman Bilawal Bhutto said this is not a fight to gain power. “Whenever there is an attack on democracy, people are crushed under the weight of such injustice.” “The poor people go hungry, people’s lives become unsafe, the air becomes unbreathable.” “The freedom to speak, to breathe, to live a life of dignity and freedom from poverty – democracy is the answer to all of this,” he stressed.

The PPP chairman said Pakistan has reached at important cross roads and the people will decide the fate of the country. “We have to fight for the supremacy of the Constitution and for democracy and this fight has to be fought by the people,” he said, adding that one by one, all those institutions that can safeguard our rights “are being hollowed out”. “All those voices are being stifled that are being raised against dictatorship. The judiciary is under pressure, the media is being silenced and we are not allowed to speak in the parliament.”

Awami National Party’s Ameer Haider Khan Hoti took the PTI government to task over rising inflation and cost of living. “Imran selected Khan, ask the poor what happens when their electricity bills come, the price of food commodities, how they are buying medicines,” he said.

National Party leader Dr Abdul Malik Baloch, during his speech, paid tribute to those who sacrificed their lives for their ideologies. “I pay tribute to Mir Hasil Bizenjo, as through his struggle, the Opposition parties are on a single platform,” he added. He also spoke of the island ordinance, saying “it is an old conspiracy – the conspiracy to divide Sindh”.

Pakhtunkhwa Milli Awami Party leader Mahmood Khan Achakzai says “when we talk about self-reliance, we are labelled traitors”. “We are not traitors, we are loyal to the land,” he said, adding that “his people had fought for the country’s independence”.

Stepping up to the podium next, Balochistan National Party-Mengal’s Akhtar Mengal started off his speech by welcoming the PDM’s leadership to the ‘lane of traitors’. “Traitor certificates for us, the followers of Bacha Khan, were issued in 1947. Our certificates are so old, they are eaten by moths now. Yours are new, so I welcome you,” he quipped, adding that whenever someone comes into power, the opposition and those who struggle for their rights are called traitors. Jamiat Ahle Hadith chief Sajid Mir said that the PDM is out on the streets to “bring real democracy” to the country and to ensure the rights of the people. He said the “one page that the government is on, will be turned with the power of the PDM”.

JUIP chief Shah Owais Noorani said that 2021 would be the year of election. “The Green Line project has been halted because it had Nawaz Sharif’s plaque on it”, Noorani added.

Ahead of the rally, the venue was jam packed with a steady stream of people continuing to storm into Bagh-e-Jinnah. Security apparatus seemed to have failed with the sheer number of participants forcing their way through. Coronavirus safety protocols were also nowhere to be found with the majority of participants standing shoulder to shoulder and without facial masks.