Imran hits out at Nawaz for maligning military top brass

* PM pledges to bring PML-N supremo back, put him in an ordinary prison
* No more production orders for opp leaders detained on corruption charges
* Requests courts and NAB to conclude corruption cases against Sharifs, Zardari 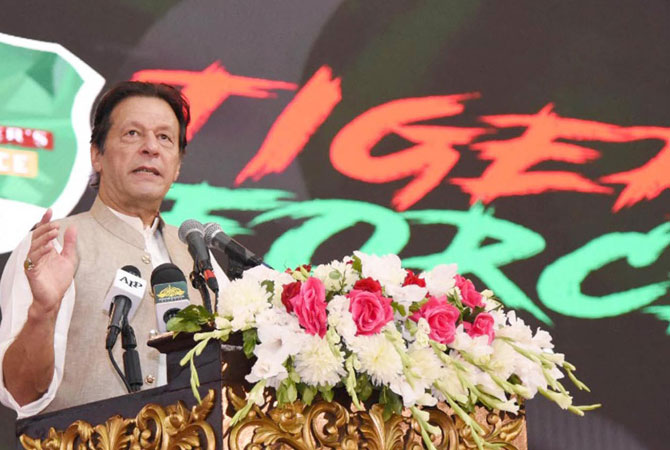 Prime Minister Imran Khan Saturday, while condemning the offensive language used by former prime minister Nawaz Sharif against military leadership, announced to launch full efforts for latter’s repatriation from London and put him in an ordinary prison by revoking VIP jail facility for the looters.

“Now I will try my best to bring you back and put you in ordinary prison, not VIP. Those who loot few hundreds of thousand rupees stay in an ordinary prison but those who laundered billions stay in VIP jail. Come back and see where I put you,” he said while addressing a Tiger Force Convention here.

Calling Friday’s public gathering of 11-member opposition coalition in Gujranwala a ‘circus’ the prime minister also requested the courts and National Accountability Bureau to conclude corruption cases against Sharif Family and Asif Zardari without any delay as the people were yearning to get back their looted money. He assured both the institutions of fullest logistics support to dispose of the said cases and also announced that he would be activating all the institutions under him to nab the looters.

He said Nawaz Sharif’s verbal attack against Chief of Army Staff General Qamar Javed Bajwa and Director General Inter-Services Intelligence Lt General Faiz Hameed was in fact an attempt to get popularity among the Indian and Israeli lobbies. “I understand whose game he is playing. I have full intelligence (reports). For me it makes no difference who is the army chief now just because I have not laundered money … he is trying to create rift between government and the army,” the prime minister said in an aggressive tone.

“So far, the opposition has seen just one Imran Khan. This is Naya Imran Khan after Friday’s speech by a jackal. Now they will see a different Imran Khan,” he said, while announcing that no more production orders would be issued for the detained opposition leaders on corruption charges to attend the parliament session until they satisfied the courts.

Terming Nawaz Sharif’s words ‘an attack on Pakistan Army, not General Bajwa’, the prime minister said the military had fully supported the government during Covid-19 pandemic, after Karachi rains, in defence and foreign policies and by slashing its annual budget considering the country’s tough financial conditions.

He told the volunteers that Nawaz Sharif first become a minister through the patronage of General (retd) Jilani and chief minister by “polishing the boots of General Ziaul Haq”. He said the PML-N leader also received millions of rupees from Mehran Bank to contest elections against the PPP. But, he said unfortunately, the country’s courts always supported him. Even it was Nawaz Sharif who jailed Asif Ali Zardari twice and it was Zardari who filed Hudaibiya Paper Mills case against him, not Gen Bajwa. “These are the people who can even put the country up or sale just to protect their corruption money. Money is their god,” the prime minister said as the volunteers chanted pro-Imran and anti-opposition slogans with a predominant chant of “diesel” a term usually referred to JUI-F chief Maulana Fazlur Rehman.

“Was Panama case filed by General Bajwa? Who was at fault then? He (Nawaz Sharif) is lying shamelessly, even his brother, sons and daughter,” the prime minister commented saying the army was maligned at time when the soldiers were under constant attack. Even 20 soldiers martyred a couple of days before, he added while repeatedly calling the former premier a ‘jackal’ for having escaped to avoid corruption cases.

He told the audience that some 11 years ago, he had forecast that the corrupt opposition parties would get united whenever they would fall in grip for their corruption. However, he avoided to comment on the speeches by Maryam Nawaz and Bilawal Bhutto calling them “kids”, though he said both were brought up on the corruption money of their respective fathers.

Just to focus more on Nawaz Sharif’s anti-military remarks, the prime minister also opted to utter nothing more against Fazl ur Rehman except calling him 12th man in the 11-member team.

Showing on screen the gloomy face of Nawaz Sharif while being in Pakistan and aggressive one during Friday’s address from London, he reiterated that Nawaz was let go abroad having seen the emotional picture of his critical ailment drawn before the cabinet.

The prime minister also quoted three books written by foreign authors mentioning corruption tales of both Sharif and Zardari families. “What they have done to their country is what Mir Jafar and Mir Sadiq had done to their people,” he remarked.

Recalling the controversy of opening of four-rigged constituencies after 2013 polls, the prime minister said after 2018 elections, he had assured the opposition to open any constituency where they suspected rigging. He said the government had collected evidences of Rs 2.5 billion of public money spent by PML-N during the election contested by now late Kulsoom Nawaz and electioneered by Maryam Nawaz.

The prime minister thanked the Tiger Force volunteers for their contributions during COVID-19, in health and environment sectors.

Repeatedly advising the volunteers not to interferer in city administration’s working, he acquainted them of their role limited to just reporting the hoarding and overpricing through the exclusive web portal that would prompt action by the district administration. Recalling tremendous public support, he got for building cancer hospital, he said the public support could do wonders and that the great nations like Pakistanis, always stood to support the country in any difficult situation.

He said the Tiger Force’s cooperation would help curb inflation and hoarding besides assisting the government in its 10 Billion Trees Tsunami to mitigate effects of climate change. Calling hoarding a “scourge” the prime minister said the government had devised a plan to curb the monopoly of sugar mill owners who so far used to announce sugar prices on their own.