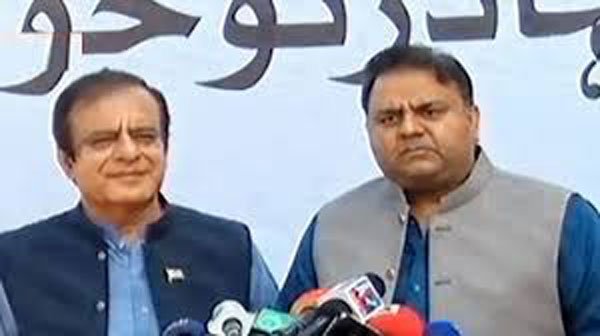 The government on Saturday lambasted the Pakistan Democratic Movement for targeting country’s institutions during the first rally of its anti-government campaign in Gujranwala and warned the alliance against playing a ‘dangerous game’, a private TV channel reported.

Addressing a press conference alongside Minister for Science and Technology Fawad Chaudhry, Information Minister Shibli Faraz said that the opposition is causing harm to the country by targeting national institutions. “You are causing the country a lot of harm [and] are using the language of our enemies which is something we will not allow you to do. We stand behind our institutions and will not tolerate any such comment which will endanger our security or the people that stand for it,” he said.

Commenting on Nawaz’s speech, Chaudhry said the former premier was acting like a ‘scorned lover’. “[Nawaz] can’t understand how to exact revenge from the Army for jilting him. He is unable to forget the past when he was [the favourite].” Chaudhry also warned the opposition against playing a “dangerous game”. “Don’t disrespect our jawans and martyrs by adopting this narrative,” he said, adding that it was India’s agenda to draw a comparison between the upper and lower ranks of the Army. “This is why I was against Nawaz going abroad […] because when such people go abroad, they become Altaf Hussain. They become an asset for the international establishment.” He said when the opposition talked about the difference between Pakistan Army officers, they were pushing India’s agenda. “That is why the people of Gujranwala, Sialkot and Narowal rejected you.” He went on to say that the opposition’s targeting of the army and the courts is saddening. “This is an attack on the state. If you want to exact revenge in this manner, by saying that until the Army and the courts play a role in helping you save your money, then [realise] that no one will do this.”

You are now working on a dangerous narrative and this will also fail, he said. The minister added that Prime Minister Imran Khan’s prediction during a TV interview in 2011- that the opposition would band together once the process of accountability was initiated – was ringing true. During the media briefing, the information minister called the opposition’s powershow a ‘flop show’. “Their show of unity lacked unity, belief and discipline. They way that Fazlur Rehman was made to address empty chairs […] I think it was made obvious that they don’t have a programme or a way forward for the people.”