Azerbaijan and Armenia allege truce violations, accuse each other in shelling 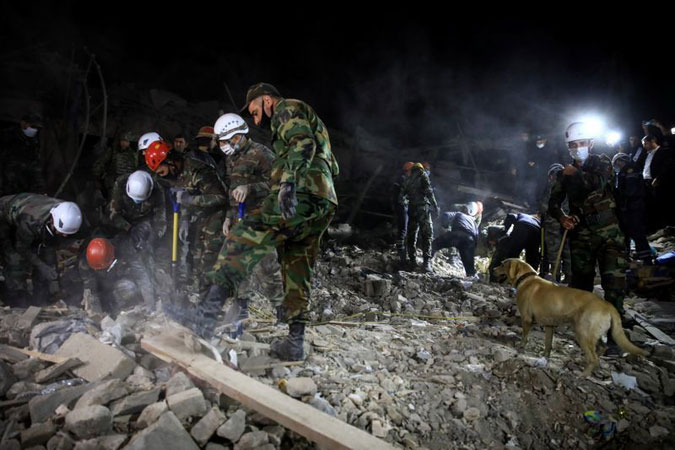 Azerbaijan and Armenia accused each other on Saturday of fresh attacks in violation of a week-old Russian-brokered truce that has failed to halt the worst fighting in the South Caucasus since the 1990s.

Baku said 13 civilians were killed and more than 50 wounded in the city of Ganja by an Armenian missile attack, while Yerevan accused Azerbaijan of continued shelling.

The fighting is the worst in the region since Azerbaijan and ethnic Armenian forces went to war in the 1990s over Nagorno-Karabakh, a mountain territory that is internationally recognised as part of Azerbaijan but populated and governed by ethnic Armenians.

The Azeri Prosecutor General’s office said a residential area in Ganja, the country’s second-largest city and miles away from Nagorno-Karabakh, was shelled by missile strikes and around 20 apartment buildings had been hit. Armenia denied the claim.

Baku also said that an electricity line which goes from Azerbaijan to neighbouring Georgia was damaged as a result of shelling in the town of Mingachevir.

“If the international community does not punish Armenia, we will do it,” he said.

“We are dominating the battlefield,” he said, adding that Azeri armed forces never targeted civilian settlements.

Armenia denied the Azeri claim that it had been bringing arms illegaly and accused Azerbaijan of acting to expand Turkey’s influence in the region and of using pro-Turkish mercenaries – charges both Ankara and Baku deny.

In Ganja, rescuers worked at the scene on Saturday morning, picking through rubble, a Reuters photographer said. Some houses had been almost levelled. An excavator was clearing the debris.

“We have been living in fear for days … We are suffering a lot. We would rather die. I wish we were dead but our children would survive,” one resident of the city, 58-year-old Emina Aliyeva, told reporters. The Armenian defence ministry denied the Azeri claim on shelling cities in Azerbaijan and accused Baku of continuing to shell populated areas inside Nagorno-Karabakh, including Stepanakert, the region’s biggest city.