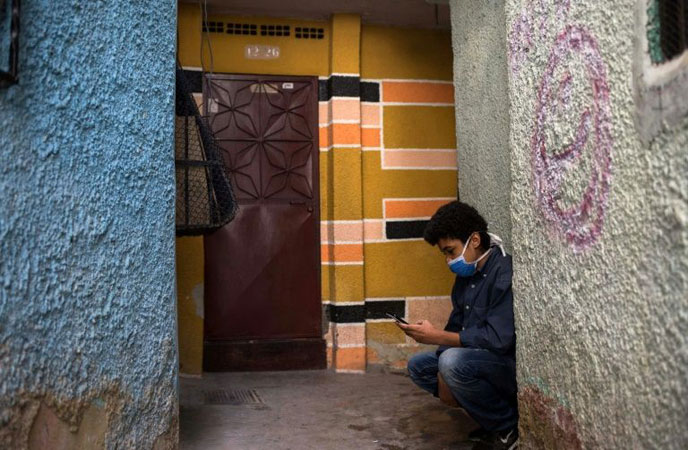 Thumbing his mobile phone, Jonathan Figueroa sits on his doorstep in a desperate daily quest for a Wifi signal to download his homework.

Battered by the pandemic and economic collapse, Venezuela’s lost generation of schoolchildren have little chance of linking up regularly with online classes given the country’s fickle internet coverage.

The 14-year-old doesn’t even have the luxury of virtual classes at his school in a poor district of Caracas, where the cost of computers is out of reach for most families.

Instead, what little interaction he has with teachers is limited to voice messages and assignments delivered on WhatsApp.

“It’s complicated. Sometimes I don’t understand anything at all,” said Jonathan.

In some ways, he is one of the lucky ones, because his mother’s employer gave him a used tablet.

But amid routine power blackouts and random internet availability, Jonathan feels overwhelmed and increasingly estranged from his school environment.

“Not only am I doing my homework badly, but I’m wasting time,” he said.

To make matters worse, Jonathan and his mother Viviana — who share a pokey rented room in a poor district — contracted the coronavirus in July.

Officially, some 85,000 cases of Covid-19 have been detected in Venezuela — a country of 30 million — with just over 700 deaths linked to the disease. Those figures are challenged by the opposition and some NGOs, who claim the real figure is much higher.

“We had Covid-19, and then God wanted us to get to know some people,” said Viviana, recalling the solidarity of neighbors who brought them food and water as they recovered their strength.

The cost of a smartphone or tablet represents years of savings for families in a country where, according to a survey by leading universities, eight out of 10 people live in extreme poverty.

Venezuela’s desperate economic crisis means that when the internet is working, the connection is among the world’s slowest.

A survey by the Speedtest site in August ranked the South American country 169 out of 174 countries in broadband speed.

Paediatricians Luzmar and Francisco Rodriguez know all about weak broadband signals. Their connection in the middle-class area of Caracas where they live should be enough to enable their children to take their private school’s online classes.

But instead the parents often have to drive around Caracas in search of an elusive wifi signal.

“You buy them a computer, a printer, the internet, a laptop… and then because of something as insignificant as rain, nothing works any more,” said Luzmar.

Their eldest son Francisco connected to his school recently from a car park outside a pharmacy, where the family managed to locate a signal.

When he has to take exams, Luzmar says she doesn’t go to work in case she has to drive him around Caracas trawling for a connection.

At the other end of the link, teachers are frustrated, too. In September, as the school year started, some took to the streets and went on strike over a demand for decent wages.

Morelis Carruido, who teaches history and geography at a Caracas public school, says staggering hyperinflation means her salary is “equivalent to $2.50 a month.”

“I have to sew, knit, prepare cakes, cook… in short, anything that keeps me going” to make ends meet, Carruido told AFP.

According to Jose Gregorio Castro, headmaster of the high school where Carruido teaches, “more than 70 percent of the students do not have internet.”

“Some don’t even have gas. They cook on wood fires,” added Carruido.

“How can they progress through online education if they don’t have enough money to meet their most basic needs?”