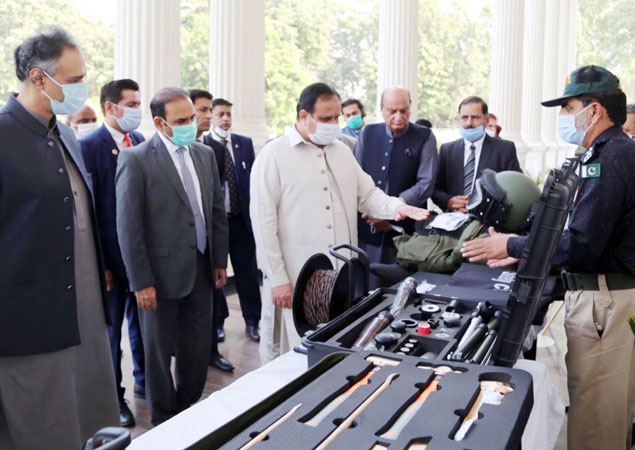 Chief Minister Punjab Sardar Usman Buzdar has said that opposition is trying to create anarchy in the country just to protect their looted money.

The chief minister said that these are the rejected defeated elements. He further maintained that nation is fully aware and these elements cannot hoodwink the public anymore. Usman Buzdar said that decisions are being taken in the interest of the country and the nation under the leadership of Prime Minister Imran Khan.

He said that despite the threat of the second wave of coronavirus, holding public gathering is numbness of opposition parties. He said that opposition leaders did not care about the lives of the people and only give priority to their personal interests.

Meanwhile, the Punjab government has taken an important step to safeguard the lives and property of the people besides timely curbing terrorist activities by providing new modern Bomb Disposal Response Vehicles equipment with the latest technology to Bomb Disposal Squad.

Chief Minister Usman Buzdar inspected the new bomb disposal vehicles during a handed over ceremony and also saw the modern equipments installed in these vehicles. Chief Minister Usman Buzdar handed over the bomb disposal vehicles to the Bomb Disposal Commander of eight concerned districts. These modern Bomb Disposal Response Vehicles are equipped with modern equipment including bomb disposal suites, mine detector and disrupters. Usman Buzdar said that the vehicles equipped with modern facilities and equipment will further enhance the capabilities of the Bomb Disposal Unit in the concerned district and lives and property of the citizens can be protected.

The Chief Minister said that bomb disposal response vehicles will be provided to every district of Punjab. He lauded the services of Bomb Disposal Unit staff in the war against terrorism. Usman Buzdar also lauded the performance of Civil Defence Punjab. Chief Minister was informed that Bomb Disposal Response Vehicles are already available in 12 districts of Punjab and with the availability of new Bomb Disposal Response Vehicles in 8 more districts, the scope of Bomb Disposal Unit has been extended to 20 districts. Provincial Minister Raja Basharat, Chief Secretary, Additional Chief Secretary (Home), Secretary Information and others were present on the occasion.

Separately, on the direction of the prime minister to ensure availability of essential commodities, especially flour and sugar at the fixed prices in the province, the Punjab government has issued orders to field officers to fully activate ‘Sahulat Bazaar’ at the tehsil level and take indiscriminate action the flour mills selling government-quota wheat in market and sugar mills involved in hoarding.

Speaking at the meeting, the Chief Secretary said that in order to control price-hike and provide relief to the people as per the directions of the Prime Minister and Chief Minister Punjab, the administrative officers have to ensure implementation of fixed prices at all costs. No negligence would be tolerated in this regard, he warned.

He directed that ‘Sahulat bazaars’ at tehsil level should be fully activated and availability of eatables, including flour and sugar at discounted rates, should be ensured there. He said that growers should be encouraged to sell their produce directly at the farmers’ platforms at ‘Sahulat bazaars’ without involvement of a middleman and required facilities should be provided to them as it would help ensure availability of fruits and vegetables at concessionary rates. He asked the officers to keep a strict check on the prices, demand and supply of food items in the Sahulat bazaars as well as in the open market.

The Chief Secretary said that despite giving a subsidy of billions of rupees for the availability of flour at fixed prices, the shortage of the commodity was a question mark on the performance of the administrative officers. He said that non-functional flour mills selling government wheat quota have been identified in the province and a crackdown against them would be started from today (Sunday). He said that performance related to price control would be reviewed on a daily basis and in case of poor performance the deputy commissioner and assistant commissioner concerned would be held accountable. In case rate lists are not prominently displayed at shops, the relevant assistant commissioner would be sent packing, he maintained.