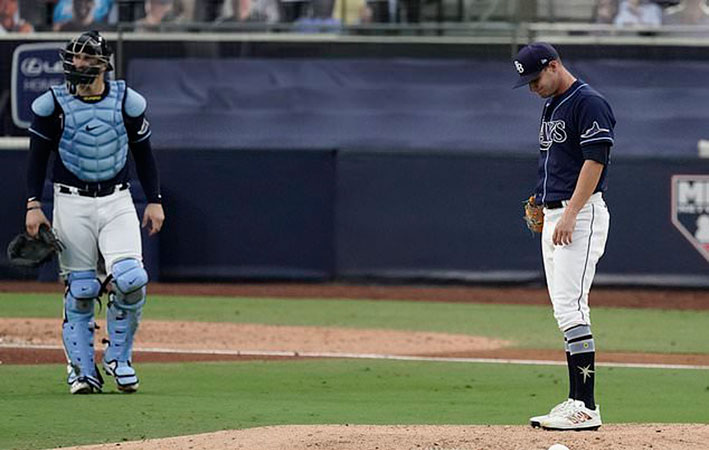 SAN DIEGO: With three consecutive losses in the AL Championship Series, the Tampa Bay Rays are on the brink of an extremely regrettable bit of baseball history.

Unlike the 2004 New York Yankees, the Rays still have a chance to avoid a flop that will follow them forever.

Tampa Bay and Houston will play Game 7 at Petco Park on Saturday after the Astros incredibly stretched the ALCS to the limit with a 7-4 victory Friday night.

“All in all, I think we´re in a pretty good spot,” said Charlie Morton, the Rays’ starter in Game 7. “But there´s no denying this is a frustrating spot to be in.”

Although it certainly didn’t feel that way when Houston turned a double play to end Game 6, the Rays are still one win away from their franchise’s second trip to the World Series, just as they were on Wednesday when they had a 3-0 series lead.

After another defeat filled with pitching woes, questionable managerial decisions and defensive mistakes that would have seemed improbable just three days ago for the AL’s winningest regular season team, the Rays are also one loss away from matching the worst playoff collapse in 116 years of postseason baseball.

Tampa Bay made up for its ordinary offense throughout the season with excellent pitching and defense, but the Rays stumbled in both aspects in Game 6. The precision that has come to define the Rays – in their fielding, their mound work and their tactical decisions – is in disarray.

“I´ve seen these guys play such clean baseball over and over this year,” manager Kevin Cash said. “We’ve got a track record of it, and we bet we´re going to get back to playing really clean, efficient baseball.”

These teetering Rays need any sort of steadiness after their first three-game losing streak since Sept. 7-10, and they expect to get it with the 36-year-old Morton on the mound in Game 7. Morton pitched two seasons and won a World Series ring with the Astros before joining Tampa Bay last year.

Morton pitched the final four innings of Houston’s Game 7 World Series victory over the Dodgers three years ago. That game was started for Houston by Lance McCullers Jr., who will start again for the Astros in San Diego on Saturday.

“I think the quicker we can get off this loss we just had, the quicker the better, and just use it as motivation,” Morton said.

The Tampa Bay bullpen that has been dominant throughout October – the “stable full of guys that throw 98 miles an hour,” as Cash memorably described them in September – allowed both of its inherited runners to score in Game 6 and went on to give up five more runs.

Rays relievers had stranded all 21 runners they inherited this postseason prior to that. Cash had to use five relievers just to finish the game, meaning his once-rested bullpen got plenty of work.

But Cash managed not to use Nick Anderson, Pete Fairbanks or Ryan Thompson, which means he´ll still have plenty of quality options for Game 7. Even starter Tyler Glasnow, who threw 96 pitches in a Game 4 defeat on Wednesday, could be available.

The Rays’ lack of success against the Houston staff is the biggest constant of the past three days. Although it’s getting increasing competition from momentum and the weight of history, plain old offense remains the Rays´ biggest problem. Aside from Manuel Margot’s two homers in Game 6 after Houston already had a big lead, the worst-hitting team left in the playoffs continues to sink at the plate. After going an ordinary 5 for 21 with runners in scoring position during their three wins over Houston, the Rays have just 10 runs and 20 hits in their three losses while batting 1 for 14 with runners in scoring position.

Mike Zunino perhaps exemplified the whole team´s feelings when he broke his bat over his knee in the fifth inning after Valdez struck him out on three pitches.

“We´re refocused,” said Zunino, who also had three passed balls behind the plate. “We´re ready to go tomorrow. The clubhouse is ready.”