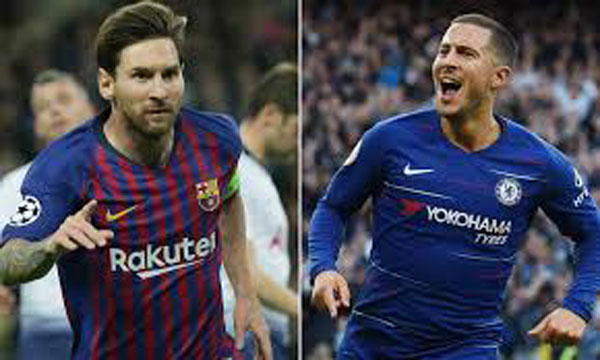 BARCELONA: Barcelona must weigh up the decision whether to rest Lionel Messi for Saturday’s trip to Getafe ahead of a congested run of fixtures, while Real Madrid are still waiting on the return of Eden Hazard from injury. Messi played the full 90 minutes in Argentina’s World Cup qualifiers against Ecuador and Bolivia during the international break, the second of which was played at altitude in La Paz. The Barca captain has not missed a single minute for his club since football resumed in June following the coronavirus shutdown. However, with seven games in the space of 21 days awaiting Barca, coach Ronald Koeman could elect to give Messi a breather before the start of the team’s Champions League campaign.

Barca host Hungarian side Ferencvaros on Tuesday and then face sworn enemies Real Madrid four days later behind closed doors at the Camp Nou. The Catalan club head to Italy for a Champions League clash with Juventus on October 28 before games against Alaves and Real Betis either side of the visit of Dynamo Kiev. Leaders Madrid are unbeaten in La Liga since March, winning 13 of their past 15 games, and welcome Cadiz to the capital this weekend. Zinedine Zidane could also opt to rotate some players but Thibaut Courtois, Karim Benzema and Vinicius Junior are in line to play after resting while others were away on international duty.

Courtois left the Belgium squad with a back injury and while he is fit to return, compatriot Hazard is not yet ready for action. The 29-year-old has yet to feature this season having picked up a muscle injury as he worked his way back from an ankle problem. He is also expected to miss next weekend’s Clasico, but Courtois believes Hazard will come good after scoring just once in an injury-plagued first season in Spain. “I have no doubt we are going to see the best of Hazard,” Courtois told Cadena Ser radio. “He is more desperate than anyone to show it. He’s coming along well and hopefully soon he can prove it. He added: “I am sure that in no time he will explode and will give many joys to the team.”

Atletico Madrid visit Celta Vigo in their first game since the sale of Ghana midfielder Thomas Partey to Arsenal on transfer deadline day. Partey made 188 appearances for the Atletico and was part of the sides that reached the 2016 Champions League final and beat Arsenal on the way to winning the Europa League in 2018.

One to watch: Oussama Idrissi: The Dutch-born Morocco international could make his Sevilla debut at Granada after joining the club on a five-year deal from AZ Alkmaar. Idrissi, 24, scored 13 goals in 25 games in the Eredivisie last season before it was declared over in March due to the Covid-19 outbreak. Julen Lopetegui’s Europa League winners are one of four undefeated teams in La Liga this term, with seven points from their first three matches.

12 — goals scored by Sergio Ramos since the start of the 2019/20 season, more than any other defender in Europe’s top five leagues.

250 — goals scored by Karim Benzema for Real Madrid. The Frenchman is only the fifth player to reach the mark in club history.