THE GAME IS ON!

* Nawaz blasts PTI-led government for 'failing to do its job'
* Maryam urges Imran Khan to resign or 'else people will throw him out'
* Bilawal blames PM for 'wreaking havoc' in country
* Contrary to NCOC guidelines, there was next to no social distancing and most participants were not wearing masks 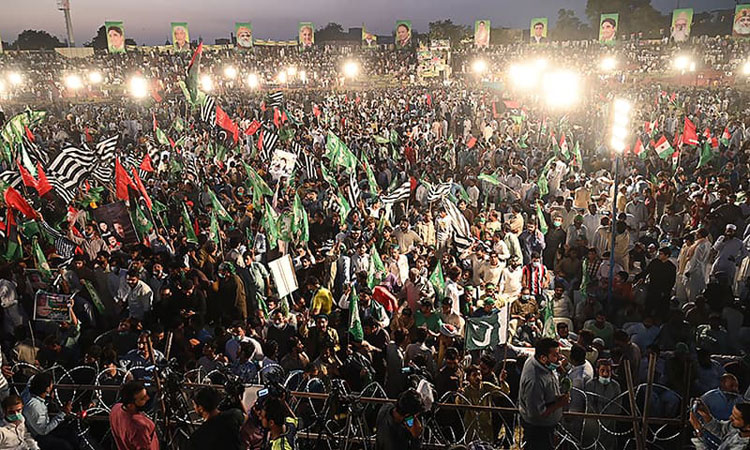 The opposition parties’ Pakistan Democratic Movement launched its mass contact campaign on Friday from Gujranwala as a show of force against the incumbent PTI government.

PML-N supremo Nawaz Sharif joined in from London via video link and blasted the PTI-led government for ‘failing to do its job’, saying the people are paying for its ‘incompetence’. He questioned why a dictator despite being handed punishment by court was able to get away yet civilian leaders like himself were victimised. “Why are elected prime ministers not allowed to complete their five-year term? We made so many strides in development,” he said, talking about his tenure as premier.

Nawaz also talked about being labelled a traitor and said this wasn’t the first time that dictators had used this term for civilian leaders to oust them ‘because they talk about the law and constitution’. “Who are patriots? The ones who destroyed the constitution, who broke the country into two halves,” he asked.

PML-N Vice President Maryam Nawaz Sharif said people from Lahore to Gujranwala are demanding PM Imran to resign. Referring to PM Imran’s recent visit to a shelter home in Islamabad, Maryam said, “Tell him [PM Imran] that now people will not provide him refuge no matter what.” She urged PM Imran to resign or “else people will throw you out”.

The PML-N stalwart said PM Imran boasts that state institutions are on the same page. “He [PM Imran] must keep this in mind that it won’t take too long in turning the page,” she added.

PPP Chairperson Bilawal Bhutto Zardari, while addressing the rally, said Pakistan’s economy is facing the worst crisis in its history which he said has led to an unprecedented inflation and poverty in the country. “People are even unable to afford two meals a day and situation is getting worse by day,” he said, while blaming Prime Minister Imran for wreaking havoc in the country.

While recalling that how his government dealt with multiple challenges in 2008, Bilawal lashed out at Imran Khan, saying “he has only Tiger Force to resolve all issues.” He claimed that the PTI-led government under the guise of anti-corruption drive is only victimising their political opponents, adding that Imran Khan and his sister Aleema were not put behind when corruption allegations were levelled against them.

JUI-F chief Fazlur Rehman was also among top opposition leaders who gathered in Gujranwala to take forward their anti-government campaign. The gathering, however, faced issues in timing as key speakers had not addressed the crowd up until 12pm. PML-N Vice President Maryam Nawaz arrived at the rally after an hours-long journey from her Lahore residence around 9pm and was followed by PPP Chairman Bilawal Bhutto Zardari, who had been staying in nearby Lala Musa since a day earlier. Jamiat Ulema-i-Islam chief and PDM President Maulana Fazlur Rehman’s convoy, however, arrived a little after 11:30pm.

Earlier, JUI-F’s Fazl said that all opposition parties are ‘committed’ and there ‘should be no perception that some political force is looking for any reconciliation or thinking of it’.

Hundreds of supporters and workers had started gathering at the Jinnah Stadium, Gujranwala, in the afternoon after arriving from different cities in the form of rallies. They chanted slogans and waved flags of the various opposition parties that are part of the PDM alliance, as opposition anthems were played on loudspeakers. Contrary to the guidelines issued by the National Command and Operation Centre (NCOC) for public gatherings in view of the coronavirus pandemic, there was next to no social distancing and most participants were not wearing masks.

According to reports, an estimated 20,000-25,000 people were in attendance at the rally. The stadium has a capacity of 35,000. Nearly 10,000 seats were arranged in the ground, while some 25,000 people could be accommodated in the various enclosures at the stadium.