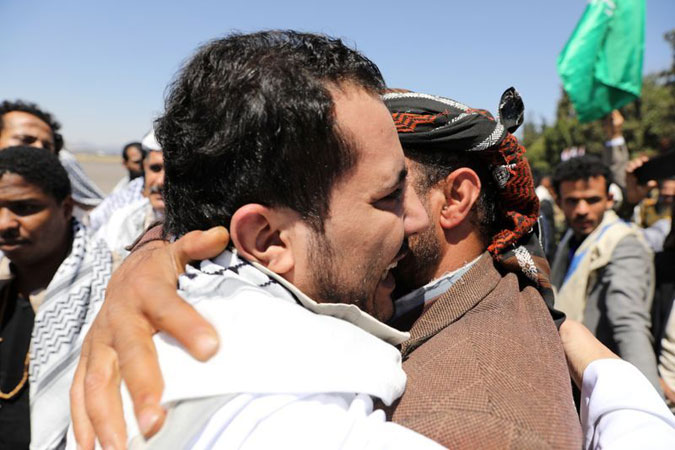 Yemen’s warring parties exchanged hundreds more prisoners on Friday on the second and final day of an operation to fly about 1,000 men home and help build momentum for a new push to end a catastrophic war.

A Saudi-led military coalition, backing the internationally recognised Yemeni government, and its adversary, Yemen’s Houthi movement, agreed last month to exchange 1,081 prisoners, in the largest swap of its kind in the five-year-old conflict.

The International Committee of the Red Cross (ICRC) said 1,056 in total were returned home, adding it hoped this would lead to further detainee releases and transfers.

Men descending from a plane when it landed in Aden, temporary capital of Yemen’s government, prostrated their foreheads to the tarmac. Some embraced waiting friends and relatives.

“I am experiencing indescribable happiness and feelings beyond imagination,” Wahhab said after disembarking.

In Sanaa on Thursday night, celebratory fireworks crackled in the night sky as buses carrying returned prisoners moved down a road lined with people cheering in welcome.

On Friday 352 prisoners were exchanged after more than 700 were swapped on Thursday — including a plane carrying Saudis and Sudanese to Riyadh — said the ICRC, which managed the process.

ICRC planes shuttled twice between Aden city and the Houthi-controlled capital Sanaa on Friday, taking 151 detainees to Aden and 201 to Sanaa.

U.N. Yemen envoy Martin Griffiths told the Security Council on Thursday the swap was an “airlift of hope”, adding that both parties remain in negotiations for a permanent ceasefire, which he hoped could be agreed by the end of the year.

The warring sides had agreed in 2018 to swap 15,000 detainees split between both sides to pave the way for political negotiations to end the conflict, but progress has been slow.

Ahmed Hamed, the Houthi-appointed head of the Presidency Office in Sanaa, told Reuters he hoped more progress on prisoners would be made, given the U.N. push on this issue.

The head of the Houthis’ prisoners’ committee told Al Masirah that seven bodies of men who died in detention had been received so far and another is expected to arrive on Saturday. He also said he hoped another, bigger swap deal could be agreed. Preceding the exchange, on Wednesday, two U.S. nationals held by Houthi rebels in Yemen were released and taken to Oman, with Oman sending flights to Sanaa to return 250 Yemenis from the Gulf state and abroad. Yemen has been at war since the Houthis ousted the internationally recognised government from power in Sanaa in late 2014, prompting the coalition to intervene in 2015.