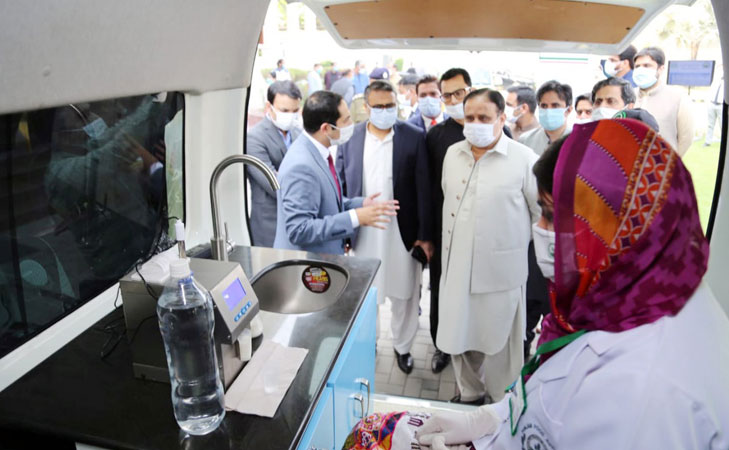 Chief Minister Punjab Sardar Usman Buzdar, on the occasion of World Food Day, has inaugurated five new initiatives of providing quality food to the citizens. A ceremony organized by Punjab Food Authority was held in CM office in this regard, on Friday.

Usman Buzdar said that Punjab government, on the occasion of World Food Day has taken initiatives for providing safe and quality food to the citizens. First time Motorway Squad has been constituted for inspecting the food points situated at Motorway at Sukkhke, Sial Mor, Bhera, Kallar Kahar and Chakri Rest Areas and will take legal action against those elements who involved in adulteration. He said that according to the vision of Prime Minister Imran Khan, modern lactoscan machines have been provided in 36 districts of the province for ensuring quality milk to the people. These machines have ability to check any kind of adulteration in milk.

He further maintained that surveillance of food authority teams have been started with the help of modern body cameras. These cameras will help in live audio, video surveillance and location monitoring of the teams. In order to ensure adulteration-free quality food to the people, free milk testing has been started throughout the province. Now anyone can bring 20 ml milk sample along with CNIC and get immediate result.

Food Authority Bike Squad has been set up in 36 districts of the Punjab for curbing adulteration mafia. This squad will check the quality of food from the food points established in congested bazaars and streets. He said that on this eve the government commits to utilize all out resources for providing safe, hygienic and quality food to the people as it is the top priority and responsibility of the government.

He said that the drive against the adulteration mafia and those who are selling substandard food items will remain continue and no one will be allowed to play with human health. Provincial Minister Fayaz ul Hassan Chohan, Chief Secretary, Chairman Punjab Food Authority Umer Tanvir Butt, head of special monitoring unit, Secretary Information and concerned authorities were present on this occasion.

Chief Minister Punjab Sardar Usman Buzdar has said economic disparities are needed to be removed to alleviate poverty. In his message, the CM said poverty alleviation would help in overcoming intolerance in society because the unjustified distribution of resources widens economic gulf at the grassroots. The PTI government has a full understanding of issues faced by the poverty-stricken segments and different steps are taken to improve their quality of life, he added.

The rich should also attend to this social issue and lend a helping hand to governmental efforts. This day encourages collective efforts to lessen the difficulties of the indigent strata and the nation should reiterate that all-out efforts would be made for the welfare of the hapless, concluded the chief minister.

Chief Minister Punjab Sardar Usman Buzdar has strongly condemned terrorists attack on the convoy of OGDCL and expressed deep sense of sorrow and grief over the martyrdom of security officials. Chief Minister paid tributes of the sacrifice of martyred security officials and extended heartfelt sympathies and condolences with the bereaved family members.

Usman Buzdar said that brave sons of soil foiled the nefarious designs of the terrorists by sacrificing their lives while discharging their duty. All the sympathies of the nation are with the family members of martyred.

Chief Minister Sardar Usman Buzdar has said that number of active cases of corona have been increased by 2016 in the province. During the last 24 hours 130 corona cases have been reported and 2 patients have died. 2283 patients have been died in the province as yet. 11672 tests were conducted during the last 24 hours and 1419284 tests have been conducted in the province as yet. Whereas, 97002 patients have been recovered out of 101301 corona patients. The CM said that continuous implementation on the preventive measures is the interest of the people. Citizens should maintain social distancing to protect their lives. The threat of spreading further coronavirus cannot be ignored through public gathering. He said that opposition parties are playing with the life of people only for their personal motive. He said that corona is a national issue and unfortunately opposition is trying to politicise it.