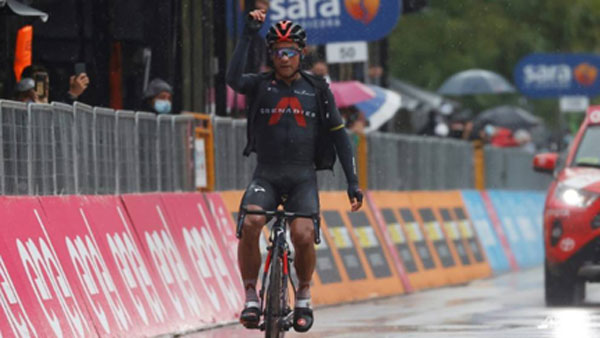 CESENATICO: Ecuador’s Jhonatan Narvaez soloed his way to victory on a rain-drenched 12th stage of the Giro d’Italia on Thursday to give Ineos Grenadiers their third win in this year’s race. On a day in which the weather conditions dampened the hoped-for fireworks in the GC battle over five categorised climbs, Narvaez and Ukraine’s Mark Padun (Bahrain McLaren) battled it out after escaping from a 14-man lead group. But Padun suffered a broken front wheel with little more than 20km of the 204km stage from Cesenatico to Cesenatico left and despite valiantly chasing down Narvaez he ran out of legs. Narvaez, 23, kept the power down to extend his advantage in the closing kilometres, winning by over a minute.
It was a day of consolidation for Portugal’s Joao Almeida (Deceuninck-Quickstep) who retained the leader’s pink jersey, preserving his 34-second lead over Wilco Kelderman (Sunweb). The race leader’s group finished eight minutes and 26 seconds behind Narvaez. After the bitter disappointment of losing team leader Geraint Thomas to a fractured hip sustained in the third stage, British team Ineos Grenadiers have bounced back in style. Filippo Ganna followed up his stage one time trial success with victory on stage five and Narvaez produced a superb ride on a miserably cold and wet day in the northern Apennines. With the peloton giving up the chase on the final climb of the day, Narvaez and Padun looked set for a head-to-head time trial to the finish on the Adriatic coast.

But Padun’s misfortune turned Narvaez’s first Grand Tour stage victory into a procession as he covered the last 10km in just under 13 minutes at an average speed of 46.8kmh. Friday’s stage is a more or less flat 192km route from Cervia to Monselice and should be another day for the sprinters.