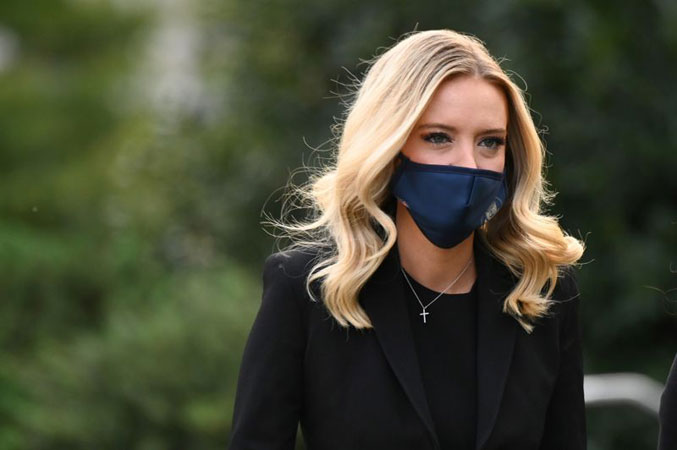 Two weeks after the coronavirus spread through the White House, staffers have begun trickling back to the West Wing, saying they only had mild symptoms and again spurning the use of masks despite criticism that they have been careless about the outbreak.

With President Donald Trump declaring himself immune after his own bout with COVID-19 required hospitalization, his aides at the White House, his re-election campaign and the Republican National Committee are steadily recovering from a sickness that sidelined many of them just weeks before the Nov. 3 election.

Trump returned to the campaign trail on Monday and has trips scheduled all week in an effort to make up for time lost while he received treatment as Democratic rival Joe Biden campaigned.

One White House official said most people affected by the outbreak had mild symptoms, and that the White House had been “very lucky.”

Press Secretary Kayleigh McEnany has not returned to the White House since her diagnosis but hoped to by the end of the week, the official said.

Hope Hicks, a senior adviser to Trump whose own diagnosis was the first to be made public in the wave that hit his inner circle at the beginning of the month, is still not back at the White House. She said she is feeling better.

Karoline Leavitt, an assistant press secretary, is back after having mild symptoms. Other press aides such as Harrison Fields, Jalen Drummond and Chad Gilmartin are not.

Trump has faced widespread criticism for playing down the pandemic in its early stages and for dismissing the seriousness of the illness.

He has largely spurned wearing a mask himself and criticized others, including Biden, for doing so, while presiding over a White House where staffers, secret services and others routinely rejected mask use throughout the worst of the pandemic.

Ahead of Trump’s trip to Iowa on Wednesday, staff members at the White House walked around the West Wing without wearing masks, eschewing the precautions that were put in place in the immediate aftermath of Trump’s diagnosis as the virus spread.

“We have incorporated current CDC guidance and best practices for limiting COVID-19 exposure to the greatest extent possible, including staying home if you are positive or have symptoms, social distancing, good hygiene, and face coverings,” he said, adding that positive cases are taken “very seriously,” while the White House Medical Unit leads a “robust” contact tracing program with CDC personnel and guidance.

“But the essential work of the White House and the federal government must continue, which sometimes does require essential personnel to be physically in the office, and when that occurs every precaution is being taken to protect the health of the President, themselves, and the entire complex,” he added.

Former New Jersey Governor Chris Christie, who spent a week in hospital for treatment, appeared to be among the hardest hit by the virus within Trump’s circle. He said in a Twitter post on Saturday that he was released from hospital.

The White House declined to comment on reports that White House head of security Crede Bailey is seriously ill with COVID-19 and was taken to the hospital in late September.

The White House did not provide updates on specific officials’ health status.

Ronna McDaniel, the chair of the Republican National Committee, said she was feeling “much better” after she came down with the virus and planned to travel again on Thursday.

More than 216,000 people who have died from COVID-19 in the United States alone.

Trump’s diagnosis put the pandemic back at the center of the 2020 campaign and gave Biden an additional opportunity to hammer the president, while wishing him a speedy recovery, for failing to establish a national strategy for conquering the fast-spreading disease.

Trump has held rallies with thousands of people who do not engage in social-distancing or wear face coverings consistently.

A White House Rose Garden event to announce the nomination of Judge Amy Coney Barrett to the Supreme Court is suspected to be the root cause of a number of the infections of Trump’s inner circle.

University of Notre Dame President Rev. John I. Jenkins, who tested positive after attending the event, ended his period of quarantine on Monday and is symptom-free, the university said in a statement earlier this week.

Even as many in Trump’s inner circle appeared on the mend, new reports of illness are still plaguing the White House as it seeks to turn the page. The wife of Labor Secretary Eugene Scalia, Trish, who reportedly also attended the Rose Garden event, was confirmed positive on Tuesday. On Wednesday, first lady Melania Trump, who has experienced mild symptoms of COVID-19, announced that her son Barron had been infected but later tested negative.

“Luckily he is a strong teenager and exhibited no symptoms,” she said in a statement.