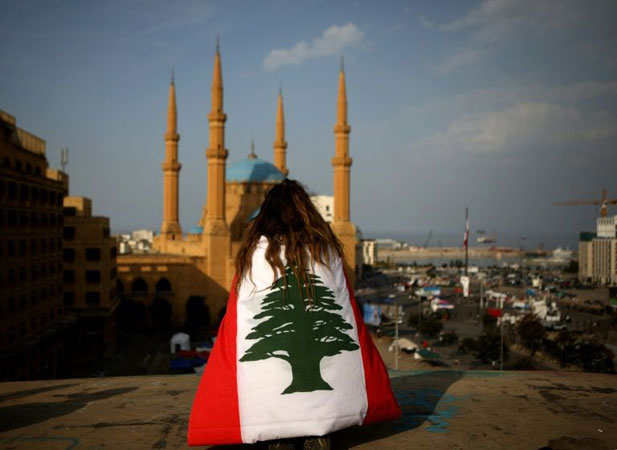 When Lebanon’s protest movement erupted in October 2019, Jennyfer, Teymour and Dayna marched in the same euphoric crowd, united in their determination to bring down their corrupt leaders.

A nightmarish year — which saw Lebanon’s economy go into tailspin and a cataclysmic explosion destroy swathes of Beirut — has left the three young people with different outlooks on life and country.

Lebanon is now suffering though one of the darkest periods in its chaotic history, and soaring poverty combined with a seemingly inexorable brain drain make for a bleaker future yet.

Faced with this reality, advertising executive Jennyfer Harb gave up on change, entrepreneur Teymour Jreissati went looking for it abroad, while writer and activist Dayna Ayyash stayed to fight the good fight.

Their diverging trajectories illustrate the challenges facing an activist movement that was born with a bang but fizzled out as a series of crises drained it of much of its revolutionary energy.

When protests broke out in Beirut on the evening of October 17 over a new tax on WhatsApp calls, Jennyfer was leaving a movie theatre, wearing a dress shirt she had picked for a work presentation.

“We looked around us and saw fires,” the 26-year-old told AFP from her Beirut home, which was damaged by the deadly August explosion.

She ran home to change and rushed back out to joint the protests.

“I didn’t understand anything at the time but it felt so good to be in rage,” she said.

Jennyfer stopped going to work for two months to stay on the streets all day.

“It was a beautiful dream — the dream of a new beginning, of something better,” she said.

Then Lebanon’s worst economic crisis in decades started to bite and the fatigue set in.

“I became so consumed,” she said. “I could not keep up with all this activism.”

But only a few days after surviving the explosion, Jennyfer said she was badly beaten by army troops while protecting a child from their batons.

“At that moment it hit me,” she said.

“They are so powerful that they could shut you up,” she said of a ruling elite that is seemingly oblivious to domestic and foreign pressure for change.

For exactly 292 days, by his own count, Teymour Jreissati put everything in his life on hold to help organise a protest group.

The 33-year-old handed over the management of the furniture company he had spent 10 years building to his business partner.

“I barely saw my children,” he said.

He converted his Beirut office into a daily meeting spot for protest leaders to plan the next move.

Teymour was on the streets almost every day, even when the crackdown turned heavy-handed.

He started receiving warnings from the security services and threats from political party loyalists.

“We will stab you in the back and you won’t know where the knife came from,” Teymour said, quoting one of the phoned-in threats.

Then came a more chilling warning, which broke his resolve, he said: “We know were your son goes to school.”

With the economic collapse also killing his business, by June Teymour was planning his move to France.

He and his family moved to Nice just one week before the port blast disfigured Beirut and killed five of his friends.

“Not a single human being should be living what the Lebanese people are living,” he said.

When the streets erupted on October 17 last year, Dayna was out in a flash.

“It was righteous, unadulterated rage,” said the 31-year-old founder of the activist group Haven for Artists.

“Finally that tight knot in my throat wasn’t just in my throat, it was around everybody’s throats, eliciting this reaction.”

Within two days she would shift from just participating in rallies to helping blockade a main Beirut flyover — a moment she said challenged the “illusion” that the system in Lebanon was untouchable.

“It was so much power given back to us,” she said.

In the months that followed, Dayna became a known figure in protest circles.

She worked relentlessly to champion all the causes that found new impetus in the Lebanese “revolution” — including the rights of women, domestic migrant workers and the LGBTQ community.

“What marked me is realising that I’m not the only one who thinks we have a lot to fight for” she said.

Reflecting on the lost momentum of the anti-government protest movement, Dayna argued that many activists had shifted their energies into emergency relief efforts after the blast.

She rejected the suggestion that the protest movement as a whole had been snuffed out. Dayna insisted that her determination was unwavering and that every new crisis hitting the country was a new reason to keep on fighting. “We cant say what it’s going to take for us to give up because they have done a lot to us and we are still going.”