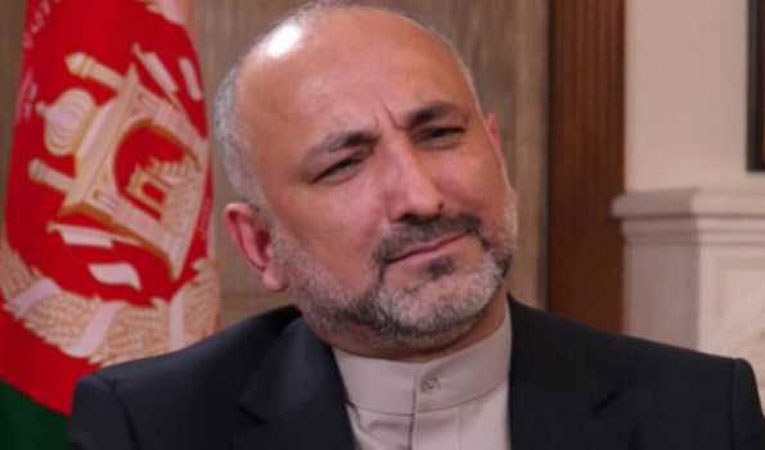 Atmar, who was talking to Pakistan’s new ambassador Mansoor Ahmad Khan in Kabul, said that political will of both the governments to further expand relations is significant for the success of the peace process.

The Pakistani ambassador termed the start of intra-Afghan negotiations as important for establishment of peace and stability in Afghanistan and the region. He said Pakistan supports the negotiations that will lead to a ceasefire and permanent peace.

Atmar welcomed Pakistan’s new liberal visa policy for Afghan nationals and said the decision will further strengthen relations between the people, according to an Afghan foreign ministry statement.

He said the new visa policy will strengthen peoples’ relations.

Mansoor Khan assured Atmar that Pakistan will remove all difficulties in issuance of visas, adding that long-term visas will be issued to Afghan nationals. He said those Afghans will also be issued long term visas who will accompany patients. He said the Pakistani embassy in Kabul and consulates in major Afghan cities have started implementation of the new visa policy.

The ambassador earlier said that the Pakistani embassy in Kabul and consulates have started a full-fledged visas operation.

Khan tweeted that the Pakistan Embassy in Kabul issued 2,059 visas to Afghan nationals on a single day on Monday. “We are working to further facilitate visa applicants. From today our Consulates are also issuing visas to Afghans,” the ambassador said.

“I have personally directed my staff to increase the number of visas being issued from our Missions. We will bring an improvement in the situation in coming days with liberalized visa policy and addition of more human resources on issuance of visas,” Khan earlier told Daily Times from Kabul.

Under the new visa policy, long-term multiple visas are being issued to the Afghan nationals for visiting Pakistan for medical treatment, family matters, business, education and other purposes. “It is important for Afghan brothers and sisters to know that Pakistani visa is without any charges. There are no agents and applications are not required to pay any amount or charges, except for the visa fee on business category,” the statement said. As the visa facility has opened recently after many months of restrictions due to COVID-19, there is a significant backlog causing large crowds of visa applicants at the embassy and consulates’ windows, according to the statement. The embassy sought the understanding and cooperation of the applicants as well as the Afghan security authorities for ensuring effective management of the submission and collection of visa applications with a view to hopefully clear the backlog in the coming days.

According to Pakistani officials in Kabul, the embassy would issue up to 2,000 visas daily before the COVID-19 pandemic. Besides, the Pakistani consulate in Jalalabad would also issue a large number of visas. Pakistan last week approved a new Visa Policy for Afghan citizens and acquiring visas will be easy for Afghan visitors with multiple entry visit visas and long term business, investment and student visas. Serious patients will be issued visas on arrival at Torkham, the major border point between the two countries. Pakistan has opened all border points with Afghanistan for trade and pedestrians.