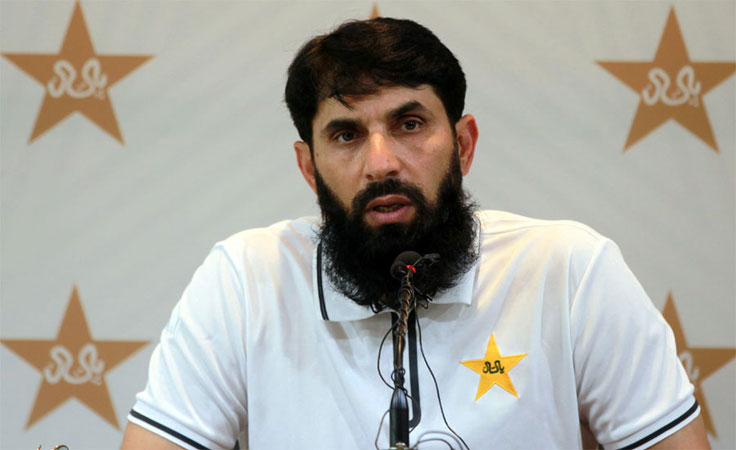 LAHORE: Former Pakistan Test captain Misbahul Haq, who took up the dual role of chief selector as well as that of head coach in 2019 on a three-year contract, has decided to step down from his chief selector’s role but will continue to serve in the capacity of head coach. Addressing a press conference here Wednesday, Misbah, who faced severe backlash after taking up the dual role, said he felt “tremendous pressure” in conducting both roles. “I have thoroughly enjoyed the dual roles but after reviewing the past 12 months and looking ahead at the workload in the next 24 months of my tenure, it is appropriate that I invest and dedicate all my time, energy and attention to one role from now on,” said 46 years old Misbah who was named for the dual role by the Pakistan Cricket Board after the national team, under Mickey Arthur, failed to qualify for the World Cup semi-finals.

“Coaching is my passion and my ultimate objective remains to contribute to the development of players and help the side achieve bigger successes. When I was appointed last year, I was offered the coaching role first and then given the option to also head the selection committee, which I had graciously accepted. I am grateful to the Pakistan Cricket Board for their understanding and for supporting my thought process,” he added. Misbah’s decision may have also been influenced by PCB’s new code of ethics ratified in July, which aims to remove issues arising from conflict of interest. However, when he had taken over the dual selector-coach role in September 2019, this specific code of ethics ––– which was ratified in July 2020 ––– did not exist. In light of the code, Misbah’s case specifically came under the spotlight under a potential conflict of interest, with him being selector and head coach of the Pakistan national side as well as having a contract with Islamabad United as head coach for the fifth edition of the Pakistan Super League. Pakistan have had mixed results under Misbah, winning seven and losing nine in 19 matches played across all formats.

Misbah said he had communicated his decision to resign from the chief selector’s post to PCB Chief Executive Officer (CEO) Wasim Khan in Islamabad last week. He clarified that his resignation was not because of any disagreements with the cricket body or a meeting with Prime Minister Imran Khan last month over a policy matter of the PCB pertaining to abolishing departmental cricket, after which the PCB had decided to call for an explanation. “There is no such reason. If that was the case, I would not be working as head coach either. It is my choice to leave this way.”

With his exit, Misbah’s unprecedented influence over Pakistan cricket comes to an end as the PCB experimented with the idea of giving him extensive roles as head coach, chief selector and batting coach. The debate in Pakistan on removing him from the dual role had started merely six months into his contract, as Pakistan were swept 3-0 in a T20I series at home against Sri Lanka. Misbah will pick the squads for the upcoming home series against Zimbabwe and the away series against New Zealand before handing over the reins to a new chief selector, who takes over from December 1.

In a statement, PCB CEO Wasim said that the board ‘wholeheartedly respects Misbah’s decision on stepping away from the chief selector role’. “Pakistan has three global events, including two Asia Cups and the ICC T20 World Cup 2021, as well as 10 Future Tour Programme commitments over the next 24 years. As head coach of the national side, he has reassessed his priorities and believes he has a better chance of producing the desired results by focusing solely on the coaching side. We are very happy to support his thinking on this,” he added. Wasim also spoke about revisiting the selection criteria with the new chief selector in the near future. “With a new chief selector, we will revisit the selection criteria to ensure that there is complete alignment between the selection committee, the high performance centre and the national men’s cricket team. With so much red and white-ball cricket ahead, we will need to select squads that have a strong balance between youth and experience,” he concluded.