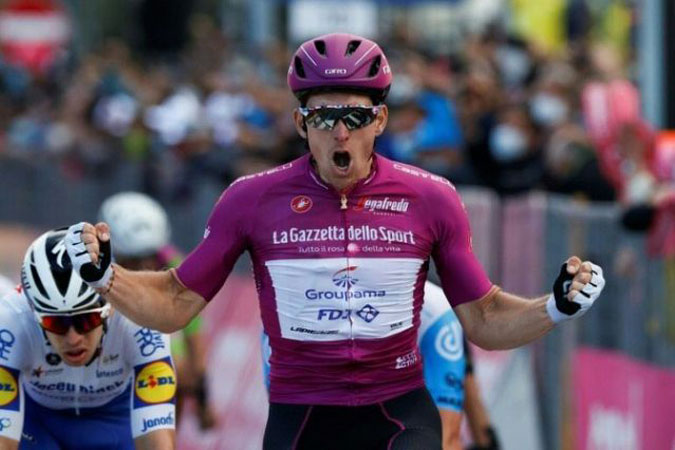 RIMINI: Frenchman Arnaud Demare’s prolific Giro d’Italia continued as he claimed his fourth stage victory in this year’s race after a bunch sprint at the end of Stage 11 in Rimini on Wednesday. The 29-year-old Groupama-FDJ rider was taken to the front by his lead-out men and finished the job in style. Triple world champion Peter Sagan (Bora-Hansgrohe) was in the mix again after his win on Tuesday but Demare edged out the Slovakian who had to be content with second place. Alvaro Hodeg (Deceuninck-Quick Step) was third.

All the GC contenders finished safely with Joao Almeida (Deceuninck-Quickstep) retaining his 34-second lead over Wilco Kelderman (Sunweb) and Pello Bilbao (Bahrain McLaren) still third at 43 seconds. After the Mitchelton-Scott and Jumbo-Visma teams left the race on Tuesday following positive COVID-19 tests, the 182km ride along Italy’s largely flat Adriatic coast was uneventful apart from an incident in which Olympic track champion Elia Viviani was clipped by an official motorbike 30km from the end. Italian Viviani appeared relatively unharmed and continued but had to work hard to get back into the group and did not feature in the final sprint as Demare again showed his class. It had looked for a while as though Belgium’s Sander Armee might hang on for a victory after he and Mattea Bais, part of an initial six-man breakaway, attacked with just over 30km remaining and built a two-minute lead as the main group was slow to organise itself to chase them down. With 10km remaining Armee (Lotto-Soudal) still had a minute on the peloton but he was quickly swallowed up on the flat and fast run-in to the Italian seaside town.

After Armee was caught with 6km remaining the UAE Team Emirates riders took up the pace in the twisty final kilometres and Fernando Gaviria was the first to attack but Demare powered through to claim victory. “Impressive, really impressive,” Demare said. “The whole team moved up for me. They had to bring the breakaway back and set a really high pace. “It feels amazing. Of course, I didn’t think I could get four stages here. I was looking for a stage win and I’m so happy. I really want to congratulate the whole team because it’s their victory as well. They believed in me.” Demare still leads Sagan in the points classification. Thursday’s 204km stage starts and finishes in Cesenatico and features a succession of tough climbs.