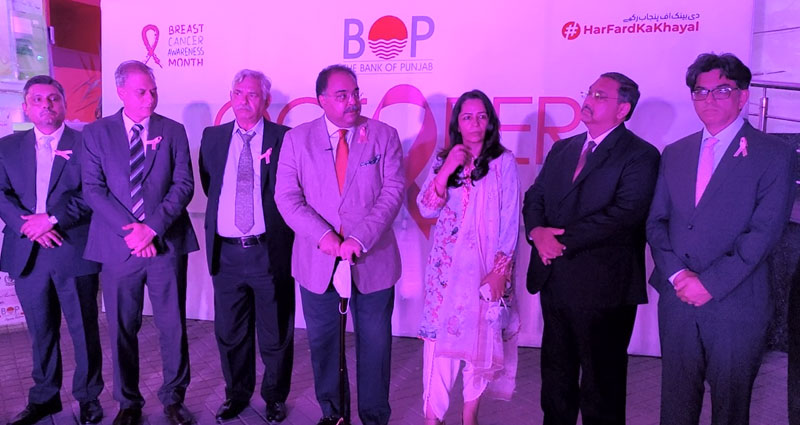 Pakistan has the highest prevalence of breast cancer among the Asian countries with over 90,000 new cases emerging every year. October is the month to create & increase awareness of breast cancer and is observed as Pink October globally.

Realizing the same, The Bank of Punjab, has taken the Initiative promoting and creating awareness related to the risks of breast cancer in our country.

As part of this campaign BOP has planned several activities including illumination of key buildings in selected cities. Bank’s staff will be wearing pink ribbons during the whole month of October. Awareness material is being displayed at BOP Offices & branches across the country along diversified campaign on Digital & Social media platforms.

An awareness event was also held at BOP’s Head Office in Lahore in which BOP’s president, Senior Management & Staff participated.

Speaking at the occasion, Mr. Zafar Masud (President & CEO – The Bank of Punjab) said, “Thousands of precious lives are lost every year from breast cancer just because of mere ignorance. Breast cancer is one of those cancers, if diagnosed at early stage, chances of survival are more than 90%.”

He further added, “Every 15 seconds, somewhere in the world, a woman is diagnosed with breast cancer-and that is far too many. Pakistan has the highest rate of breast cancer for any Asian population in the world. These alarming stats require serious concerns of every citizen of the country.”