* On Monday, Oct. 12's Emergency Contact podcast hosted by Simon Huck and Melissa Gray Washington, the Keeping Up With the Kardashians star revealed she once worked for Nicole Richie 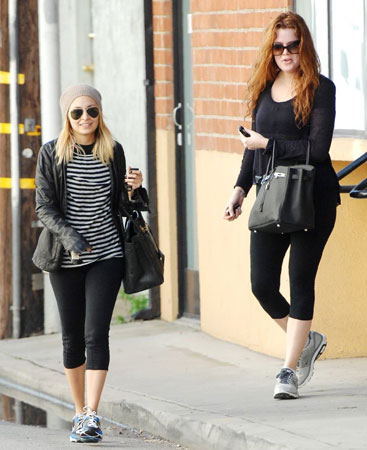 We all know that Kim Kardashian once worked for Paris Hilton. But, did you know that Khloe Kardashian also worked as an assistant for a Hollywood It-girl?

On Monday, Oct. 12’s Emergency Contact podcast hosted by Simon Huck and Melissa Gray Washington, the Keeping Up With the Kardashians star revealed she once worked for Nicole Richie. Per Khloe, through this assistant job she met Simon, who has been a longtime family friend.

Khloe started off, “I was Nicole Richie’s assistant, and you were Jonathan Cheban’s assistant and we met five faces ago.”

However, as Khloe detailed, this pre-fame gig didn’t last for long. “I went to school with her,” the Good American mogul continued. “She was one of my best friends growing up and so we were really, really close. And then, when she started doing Simple Life—I think it was after Simple Life towards the end—she just needed some help and I just needed a job.”

Ironically, despite working for a huge reality star, Khloe revealed that she “never thought about” doing a reality show until KUWTK. Furthermore, according to Khloe, the family didn’t expect the show to take off.

She shared, “We were told we were show filler and so like, ‘Don’t get too comfortable, this is just show filler.’ And then, it turned into what it turned into. But I think with that going in your head, there wasn’t any pressure You’re just like, ‘Oh OK. They don’t even think we’re gonna last, so let’s just go have fun.'”

On the end of KUWTK, Khloe commented, “It’s devastating, I think, for all of us.” As she continued, Khloe noted that the family is in different places in their lives.

“It’s hard because I’m not good with change…but that doesn’t mean I don’t need a break,” Khloe, who appeared on the podcast alongside BFF Malika Haqq, concluded. “I’m also sometimes afraid to take the break I know it’s good, I know it’s probably the best thing for all of us. But, it hits me in waves.”