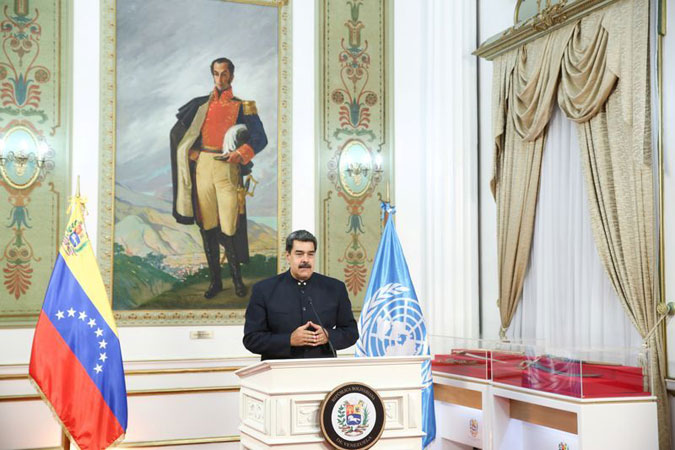 In the Venezuelan town of Urachiche, long a bastion of support for President Nicolas Maduro’s ruling Socialist Party, a radio station broadcast messages in September calling for a protest over decaying public services and chronic fuel shortages.

The man driving the rally was an activist named Edito Hidalgo of the Tupamaro party, which is closely allied with Maduro – a stark contrast from typical Venezuelan street agitators who are fiercely anti-government.

“Our people have the right to live. We want efficiency in public services,” Hidalgo said at the municipal headquarters of the town of 20,000 during a Sept. 22 march, flanked by dozens of others demanding improved access to water, electricity and fuel.

The march ended peacefully. But by the next day, nearby towns in the agricultural state of Yaracuy were convulsed with protests that troops broke up with tear gas and rubber bullets.

Within a week, hundreds of similar protests broke out across the South American nation, from the western Zulia state, which has been prone to black outs, to the isolated Caribbean shores of Sucre in the east, before a deployment of troops halted the demonstrations.

The unrest revealed how Venezuela’s agricultural heartland remains a tinder box for social unrest and how even Socialist Party stalwarts are losing patience with the privations caused by a crippling six-year economic crisis that has been accelerated by a six-month coronavirus quarantine.

In interviews with a dozen people in Urachiche and the nearby towns of Yaritagua and Chivacoa, residents described anger and weariness at the struggles of making do without basic services.

Nearly all asked not to be identified, citing possible reprisals and intimidation by security forces.

During a visit to four cities in Yaracuy in early October, protests had died down. Troops and military vehicles remained stationed on the streets.

Hidalgo, in a telephone interview, said the march he led was unrelated to the demonstrations that followed, and said citizens are angry at the lack of basic services and difficulty obtaining food.

“Our march was totally peaceful,” he said. “The people are walking around with their eyes sunken because they can’t get any protein.”

Venezuela’s information ministry did not respond to requests for comment.

Socialist Party officials say the problems with public services are the result of U.S. sanctions meant to force Maduro from office, and frequently accuse opposition leaders of orchestrating street violence.

Rural Venezuela has been a Socialist Party stronghold for more than a decade, largely because government institutions are usually the only ones that can help isolated communities that struggle to find work, housing and medical attention.

Urachiche, around 320 kilometers (200 miles) west of Caracas, was so devoted to late socialist leader Hugo Chavez that it once created a barter currency as part of an experiment in socialist economics. https://reut.rs/3j052cx

Yet the lives of small farmers in the hills around Urachiche who grow beans, corn and coffee have steadily worsened during Venezuela’s economic crisis.

Carlos Pineda, 30, used to transport his wares to market on his truck, but fuel shortages now force him to walk for hours to town carrying 50 kilo (110 pound) sacks on his back.

Mules are also sometimes available to transport goods but residents battling hunger have in many cases been forced to eat the animals.

“Some people do it on mules, but there aren’t many animals left: they’ve eaten them,” said Pineda, sitting in Urachiche’s main plaza as he prepared to sell a sack of black beans he had hauled down from the mountains.

Access to electricity, running water and fuel have steadily deteriorated in rural Venezuela in recent years as the government prioritizes urban areas such as Caracas, the capital, particularly after a massive weeks-long blackout in 2019.

“They’ve forgotten about us. No gas, water, food and now no power either,” said Maria Mendoza, 38, a merchant, who said she no longer plans to vote for “the process” – a catch phrase sometimes used to describe the Socialist Party.

The Sept. 22 march organized by Hidalgo, the Urachiche activist, went largely unnoticed in a country accustomed to seeing angry citizens in the streets.

But within days, videos on social media showed clashes between security forces in nearby towns, some of which featured what appeared to be gunshots as well as demonstrators bloodied by repeated volleys of rubber bullets.

From Sept. 22 to Sept. 30, 701 protests broke out across the country, non-profit group Venezuelan Observatory of Social Conflict said in a report released last week.

Authorities responded by arresting 35 people in Yaracuy and at least 50 nationwide, according to rights groups.