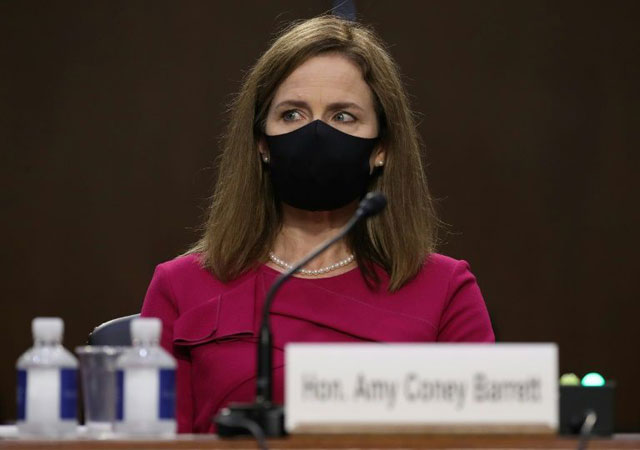 A divided US Senate drew battle lines Monday over the confirmation of Judge Amy Coney Barrett, President Donald Trump’s pick to fill a Supreme Court vacancy, as protesters faced off outside a hearing slammed as “reckless” amid a pandemic.

Barrett was accompanied by her husband and six of their seven children, all masked, for Monday’s hearing, keeping her black facemask on through the hours-long opening remarks from Senate panelists — with questioning to begin Tuesday, exactly three weeks before the November 3 election.

Democrats are largely powerless to block confirmation of the 48-year-old, who was tapped last month by the Republican president to succeed liberal justice and women’s rights champion Ruth Bader Ginsburg who died of cancer on September 18. The hearing, forced onto the calendar even as millions of Americans have already cast election ballots, has emerged as a political flashpoint.

Dueling crowds of demonstrators rallied outside the Senate office building where the hearing occurred, brandishing signs for and against the conservative law professor’s lifetime appointment. US Capitol Police made 22 arrests.

The Senate, controlled by Republicans, is constitutionally tasked with approving nominations to the high court, where conservatives now occupy five of nine seats. Barrett could cement the bench’s rightward tilt for decades.

“This is going to be a long, contentious week,” acknowledged Senate Judiciary Committee chairman Lindsey Graham. “The bottom line here is that the Senate is doing its duty.”

While Republicans praised Barrett as a competent nominee grounded in family values — Senator Mike Braun introduced her as “a legal titan who drives a minivan” — one Democrat summarized his party’s hostility to her confirmation, calling her a “judicial torpedo” fired at the health law that protects millions of Americans.